The 3rd International Education Symposium was held under the auspices of the Japanese University Consortium for Transnational Education (JUCTe), at Ritsumeikan Asia Pacific University on Wednesday, April 25th, 2007.The theme of the Symposium was "Policies and Strategies on International Student Exchange in the Age of Globalization". The Symposium examined the characteristics of Japanese policies regarding international student exchange and compared those to more advanced policies from other countries. Topics such as the direction of Japanese policies concerning international students and fostering internationally-minded students through academic-industry alliances were also addressed.

APU President Monte Cassim delivered the keynote address on "APU's Challenge of Creating a Miniature Version of the Earth". In commenting on APU's future direction President Cassim spoke about its student-body, which hails from 78 different countries and regions around the world. He said, "Even though APU is far from a major metropolitan region, its campus reflects the world around us. Let us create a new form of culture from this miniature version of the earth!" 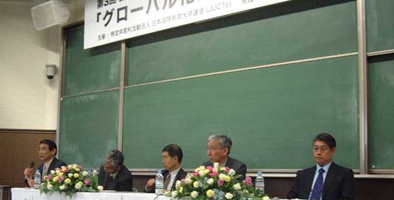 Following the keynote address, a panel discussion was held and the speakers conducted presentations on the "Future direction of student exchange policies in Japan" and "Aims of JUCTe". Audience members had the opportunity to pose questions to the speakers. Questions included "What fields in corporations do exchange students play an active role?" and "What important considerations do students make when choosing exchange program destinations? Also, animated discussions took place on how Japanese Universities can attract and secure excellent students from around the globe in this fiercely competitive international education market.

Not only representatives from the APU community, but members of the public gathered at Classroom H202 of the Graduate School (Building H) for the Symposium, which demonstrated the high level of interest on the topic of the globalization of Japanese Universities.

One of the student participants, ZHAO Ying (GSAM-APS1, China) in commenting on the Symposium said, "Issues such as overcoming language barriers will need to be addressed, but I hope to do my part in disseminating Japanese culture around the world."