This agreement aims to 1) Foster within Oita prefecture, the most advanced education in international, science and mathematics fields in Japan and 2) Develop effective human resources that are on a par with global standards.

In particular, plans are in the pipeline for various educational and research initiatives to foster exchange. 'The APU/Ritsumeikan University Advanced Course' which will be opened to thirty students from Iwata Secondary School will commence from April 2008.

'The Educational Program for High School-University Cooperation' will be carried out as part of 'APU and Ritsumeikan University's Higher Education Course'. At the Signing Ceremony APU President Cassim expressed his hopes that the agreement would deepen exchange and lead to the further development of the respective educational institutions. 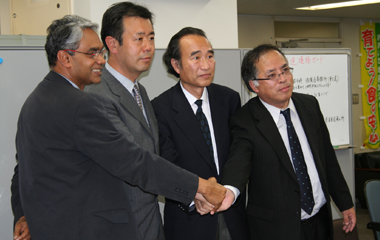