APU entered its eighth year of operation in April 2007. Integral to APU's inception was the forming of the APU Advisory Committee in May 1996. Top leaders from all over the world joined forces with the mutual aim of establishing a university that would nurture young talent and create a new academic discipline which would help shape the future of the Asia Pacific region.

On Monday, May 28th an Advisory Committee Reception was held in Tokyo to report on APU's progress and to express gratitude to all of the members for their contributions.

Approximately 60 representatives from Advisory Committee-affiliated business enterprises and organizations and about 30 foreign ambassadors to Japan attended the reception. A moment of silence was observed for those Advisory Committee members who have passed away. The Chancellor of The Ritsumeikan Trust, KAWAGUCHI Kiyofumi said a few words and President of APU, Monte CASSIM reported on current activities at APU.

Afterwards, greetings were made by the Senior Advisor and Honorary Chairman of Nippon Steel Corporation, Mr. IMAI Takashi and Ambassador to Japan for the Republic of the Philippines, His Excellency Mr. Domingo L. SIAZON, Jr. Representing students, Mr. KATAGIRI Mitsumoto (APM 4, JAPAN) and Mr. MD. MOHIUDDIN (APM 4, Bangladesh) expressed their gratitude to the Advisory Committee. 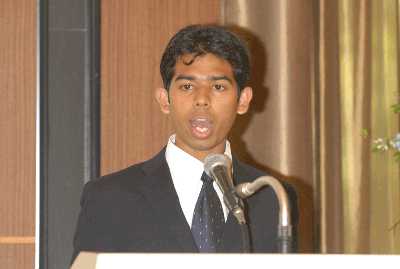 In his speech Mr. MOHIUDDIN said, "Upon graduation from High School, I had always hoped to study abroad in Japan or the United States of America because of the instability of social conditions in Bangladesh. In the end, I elected to study in Japan because of APU. I was attracted to the fact that APU is an international university where students hail from 78 different countries and regions around the world. I thought I would attain many skills studying alongside students from so many different cultures."

He added, "Another reason I chose APU was the fact I was awarded a scholarship. Considering the poor economic plight of my family, I would never have been able to fulfill my dream of studying abroad had it not been for the financial assistance afforded to me by APU."

"I am really enjoying my time at APU. I am able to interact with many Japanese students and through participating in the homestay program, extracurricular activities and attending classes; I am learning many aspects about Japanese culture and way of thinking."

"Without the support of Advisory Committee, I wouldn't be here today. Thank you for helping me realize my dream of working towards the development of Bangladesh and Japan."

The reception concluded with a few words from Senior Advisor to The Ritsumeikan Trust (former Chairman of the Board of Trustees), Mr. KAWAMOTO Hachiro, who was one of the founding members of the Advisory Committee. He expressed his sincere gratitude to all the people who have contributed their efforts to the Advisory Committee.

Receptions in honor of the Advisory Committee are also planned for Osaka, Fukuoka and Kyoto.