On June 21, APU President Cassim and Kyushu University President KAJIYAMA Tisato met in Fukuoka City to discuss the rapidly evolving roles of the university and human resource development in this generation of precipitous change.President Kajiyama explained that Kyushu University is in the process of campus relocation as part of its 100th anniversary project. He stressed that his University's mission is to create an urban university than contributes to society by training ethical, historically literate students who are able to provide leadership in any sector worldwide.

Afterwards, President Cassim expounded on APU's international education environment. He emphasized that though APU may be distant from many students' home countries, its diverse student body truly reflects the world at large; consequently, APU attracts many international figures on the cutting edge in their respective fields.

President Cassim added that the new APU curriculum, devised to both nurture and extract maximum benefit from APU's multicultural environment, aims to produce graduates that possess technical proficiency, ingenuity, practical experience and who are committed to playing vital roles on the global stage.

Both Presidents agreed that the role of Universities is to focus their education and research on assisting the global community rather than just profit generation and other interests. Also discussed was the possibility of an "experiential" educational program that students from both universities could participate in.

A transcript of their interview will appear in the Nishi Nippon Shinbun in mid-July. 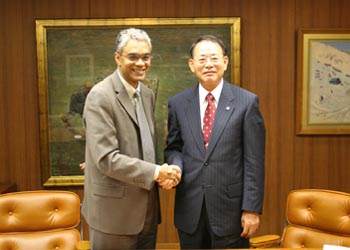