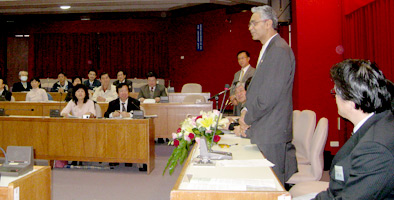 Professor WANG Mariner hosted the ceremony and invited APU President Monte CASSIM to say a few words. The president expressed the value of personal networks and spoke of his hopes for mutual collaboration in order to expand APU's presence in Taiwanese society in the future. APU Vice President, Mr. TAKASUGI Tomohiko, then explained the sequence of events leading to the establishment of the two associations.

After the ceremony, an academic symposium entitled "The Future of Higher Education in the Era of Asia" was held in a large lecture hall at the same university. APU Associate Professor LIU Jung-Ching hosted the symposium and Dr. LEE Yuan Tseh, Nobel Prize Laureate in Chemistry and President of Emeritus and Distinguished Research Fellow at Academia Sinica, delivered a keynote speech on the theme of "The Challenge of Higher Education in Asia". This was followed by a panel discussion between Dr. LEE, APU President Monte CASSIM and National Taiwan Normal University President GOU Yih-Shun. A question and answer session was also held with the audience and the symposium appeared to be a great success.

Following President CASSIM's greetings at the reception, a toast was made by National Taiwan Normal University Vice President CHEN Jo Chiung-Hua, who visited APU on a previous occasion. Symposium participants including students, alumni, parents, members of the public, and university faculty and staff enjoyed socializing together afterwards.

During all the pleasant chatter, APU visiting professor, Mr. CHEN Zu-Chung also made a speech and everyone appeared to have a pleasant time taking photos and using this opportunity to mingle and widen their networks. 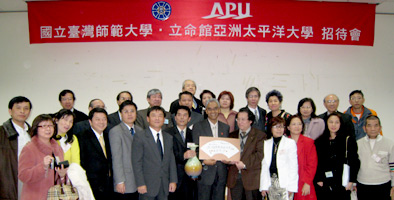