The signing ceremony for the Memorandum of Understanding between APU Tourism and Hospitality Institute and Beppu Foreign Tourist Welcoming Committee was held at the City Government Press Club in Beppu City Hall on February 14th 2008. The Memorandum relates to the creation of statistics on foreign tourists in Beppu. 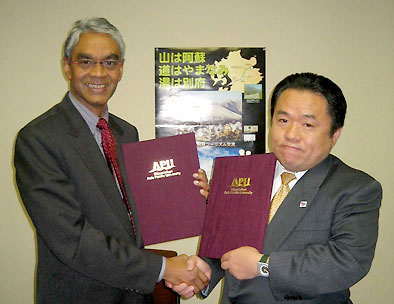 APU Visiting Professor Masakatsu Ogata has, on a voluntary basis, been compiling the statistics on foreign tourists that Beppu Foreign Tourist Welcoming Committee publish since September 2000. The statistics are now being officially adopted by Beppu City. This Memorandum of Understanding was concluded to reflect the importance and significance of this development, and also to help foster a strong research relationship between the institute and the committee.

APU Tourism and Hospitality Institute will also be holding a workshop at Oita International House (Beppu City, Kyo-Machi) during the afternoon of Wednesday March 12th as part of the Citizens' College course on the 'Renaissance of Onsen Tourism.'
Please click here for more details (Japanese Only).