APU was awarded the "6th Chado Culture Advancement Award" in the Urasenke Tradition of Tea "6th Chado Culture Awards", and President CASSIM attended the prize-giving ceremony, which was held in Kyoto on Tuesday 26th February.
Chado is the traditional Japanese tea ceremony and Urasenke is one of the three main schools in Japan that teaches chado, the "Way of Tea".

The "Chado Culture Advancement Award" is granted in recognition of outstanding service in areas such as chado-related arts and crafts, the dissemination of chado, the nurturing of successors, the advancement of chado education in schools, and the nurturing of the youth division members, and this prize has been awarded annually since 2003.

In AY 2001, APU established a course in Japanese tea ceremony, which has gained popularity not only amongst Japanese students but foreign students also.

This course, in which a foreign instructor, Ms. TORITANI Pongpan, introduces Japanese culture in English through the tea ceremony, was highly commended as one that is rich in internationalism, and was therefore awarded this year's prize. 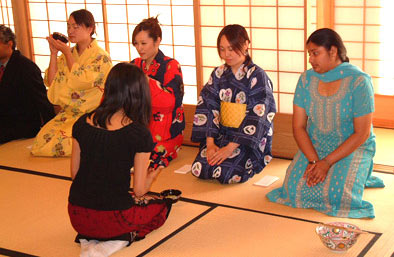