The ceremony commenced with a welcoming address from APU President, Mr. Monte CASSIM who said, "In the years these young people are with us at APU, we would like to prepare them to face the future. That is the mission of this university. Through fostering the cause of humanity, freedom and peace, it is a place to nurture the next generation of global leaders and to chart the future of the Asia Pacific region."

Then, on behalf of the new undergraduate students, Ms. YOSHINAGA Rie (APS, Japan), gave a speech on behalf of all undergraduate students stating: "I find myself with renewed determination to pursue my studies alongside fellow students gathered from around the globe, and to grow together with them while expanding my outlook on the world. I hope now to take my first steps towards becoming a person who can make a positive contribution to society, founded on my own firm beliefs as an international citizen."

Mr. LASMIN (GSM, Indonesia) spoke of his hopes and aspirations, "I would like to thank the university for accepting us to this unique and international campus. We are really excited to find out that we are only a few steps away from becoming family members of APU. These two features, "unique" and "multi-cultural", are the main reasons why I want to study at APU."
The hopes of the new students were evident on their faces as they listened to the various speeches.

As a finale to the Entrance Ceremony, current students held a few short performances in order to introduce the various Circles and Societies at APU.
The Convention Hall came alive as the audience enjoyed the enthusiastic performances, which sent a warm welcome to the new APU students about to embark on their new campus life. 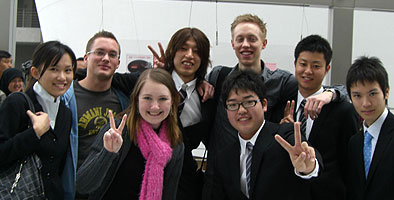