The Myanmar Cyclone Saviors Committee, a student group founded to support Cyclone Nargis relief efforts, held a charity event at the APU Cafeteria on 16th May 2008 to aid in the swift reconstruction of stricken areas. 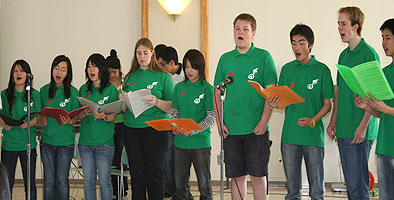 According to the UN, Cyclone Nargis slammed directly into the Myanmar delta region on 2nd May. It is said that the death toll might reach more than 100,000, and more than 1 million people remain in a precarious situation. In addition, there are concerns about public health problems: the spread of cholera, dysentery and the lack of clean drinking water.

61 students from Myanmar are pursuing their studies at APU. The Myanmar Cyclone Saviors Committee was organized by student volunteers in response to the extensive damage sustained and lives lost.

In the event, Myanmarese students played the traditional Myanmar harp, and APU-registered student groups Wadaiko Raku, MUSY TONE and Life Music also performed. One of the staff members wearing a hand-made T shirt printed with "Help for Myanmar People" said, "One person could never have done this alone, but the solidarity among students has made this possible. We want to utilize the donations for the reconstruction efforts in Myanmar."
Students from many different countries actively participated in the fund-raising campaign.

Prior to the event, the committee conducted fund-raising campaigns in front of JR Beppu Station, Tokiwa Beppu and JR Oita Station. A total of 738,596 yen was raised and the part of them was donated to Myanmar through UNICEF. The committee considers sending the rest through some organization including NGOs.The committee promises to inform how to send this donation to Myanmar at a late date. 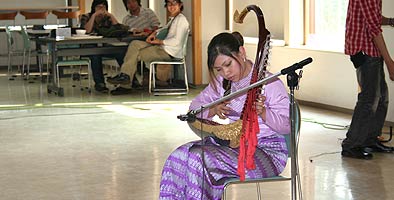