On Friday, July the 18th 2008, MATSUI Hiroki, a diplomat of Japan's Ministry of Foreign Affairs (MOFA) gave a lecture entitled "The diplomatic significance and landscape with Africa" at APU. Matsui diplomat was one of the people in charge of the TICAD Ⅳ (4th Tokyo International Conference on African Development) which took place in this May. He was engaged in a variety of talks from the African actual condition through to his motivation to become a diplomat. 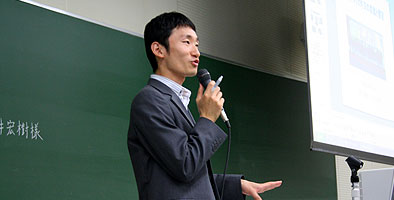 The lecture was in a series of "International Field Career Seminars", held for APU students interested in working in international organizations, MOFA and so on. MATSUI diplomat explained the actual condition of Africa, using data and maps which show the percentage of population and GDP of African each country in the world in an easily understood way. He said, "African countries still have a lot of difficulties such as poverty and HIV AIDS but many countries have rebuilt peaceful societies since the 1990's and involved in the economic activities actively. The average CDP growth rate of African countries from 2005 to 2007 is over 5 %. The world sees the Africa not only as being aid receiving countries but also as investable countries with resource power".

Matsui's High school senior by one year, Mr.HATTORI Yoshihiro was shot dead in Louisiana, USA in 1992 when he visited the wrong house by accident instead of going to his friend's house on Halloween night. Through the incident, he became aware of international issues and began to participate in the gun control movement. He aimed to become a diplomat with a mind to "look for similarities, not differences between countries, and open a path to exchange and diplomacy." He introduced the following criteria for a diplomat. 1st: The ability to be sensitive to, and pick up on the times and people's condition. 2nd: A logical thinking for making policies. 3rd: A presentation ability to evoke people's sympathy. He also gave encouraging words to the students, saying "Expand your possibilities for the future with the passion to utilize your impressive experience, what you are and your wish" "Nothing ventured, nothing gained. Just do what you really want to do and then make your own footpath" He took much time to answer each question from more than 20 students thoroughly and the students thanked him again and again.

Matsui diplomat graduated from Ritsumeikan University, Economics College in March 2000. After completing his studies at Osaka University Graduate School, he joined the MOFA in 2002. 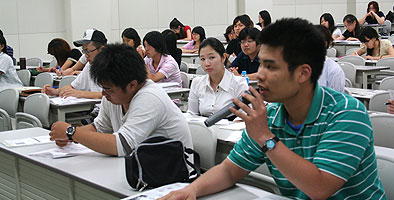