On Wednesday, July the 23rd 2008, TANIMOTO Takuya, a diplomat of Japan's Ministry of Foreign Affairs (MOFA) gave a lecture at APU International Field Career Seminars.TANIMOTO diplomat, specialist personnel of MOFA and alumnus of Ritsumeikan University introduced himself, saying "I have a great deal of curiosity. I wanted to stand at the scene of diplomacy which will be recorded in Japanese History." He defined his work of approximately 9 years as so much fun and talked about how attractive the diplomat's work is. 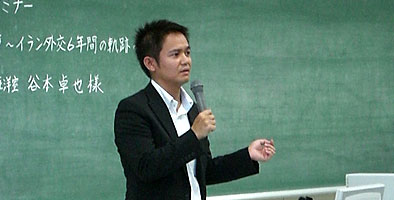 TANIMOTO diplomat had worked in Iran from July 2001 through to June 2006 after he had been trained as the Persian specialist of MOFA. During his mission in Iran, there were a lot of incidents which the world paid attention to such as the September 11 terrorist attacks, the Iranian National Election and the Great Bam Earthquake. He had gathered information and intelligence about the political situation and foreign policies in Iran and analyzed how these things influenced Japan and the world. He was committed to the Japanese diplomacy with Iran as well as the friendship exchange activities between Japan and Iran. He talked about an episode when some Iranian Muslims prayed for the victim of the September 11 terrorist attacks shortly after it happened although the US looked upon Muslims as enemies. He also mentioned what he saw and felt when he visited the local provinces in Iran with the Japanese Ambassador to Iran. His stories of rich experiences appealed to APU students, and the students listened to his stories with great interest. Furthermore he talked about his experience with humor in the UK where he attended the language trainee of MOFA. "When Prince Charles and Crown Prince Naruhito pushed their way among the crowd, I linked my arms with English bodyguards and guarded them. I never expected to conduct such work in MOFA but it was a great experience. Diplomats cover a variety of work!"

In response to the students' questions, he commented, "I want to devote myself to maintain good relationships between Japan and Iran", "I am satisfied with not only the diplomatic affairs but the work for helping and protecting the tourist with some troubles. I was happy to hear these tourists' appreciation toward the Embassy." TANIMOTO diplomat's positive attitude toward life and work sincerely motivated APU students.

When TANIMOTO diplomat pursued his studies at College of International Relations, Ritsumeikan University, he participated in the studies session by APU Vice President YAKUSHIJI Kimio (Mr.YAKUSHIJI worked for the Ritsumeikan University at that time). After completing his work in Iran, TANIMOTO diplomat currently works for Fishery Division, Economic Affairs Bureau of MOFA. 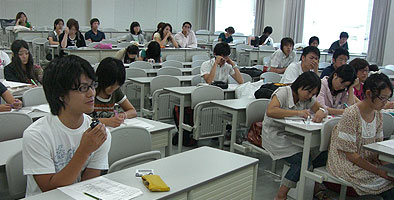