On Saturday 5th and Sunday 6th of July the 2008 Kyushu Futsal Tournament was held in Kumamoto City. The APU Futsal Circle team "DELFINO" participated as the representative of Oita Prefecture and placed 3rd.

The top 8 teams which have won their respective prefectural preliminary tournaments played to win in the 2008 Kyushu Futsal Tournament. The winner and runner-up team will play in the 2008 National Futsal Tournament to be held in the Maishima Arena (Osaka) in late August. In the preceding Oita Prefectural preliminary tornament last June DELFINO got revenge over the Nippon Bunri University team, to whom they painfully lost to last year, by beating them in the final and achieved their first tournament title.

Reflecting on the tournament, the circle spokesman SUGAWARA Seiji (APM3,Japan) vowed to build on this result and said "We just kept looking towards the National Tournament and the hard games came at a heavy price. We were beaten 8-7 in the semi-final and therefore miss out on the National Tournament but, we were able to show our full strength. Many people came and supported us from APU and for that we are very thankful."

DELFINO was established in 2000 and currently has 24 members. They practice 2 times a week at the APU Gymnasium on Wednesday and Saturday. 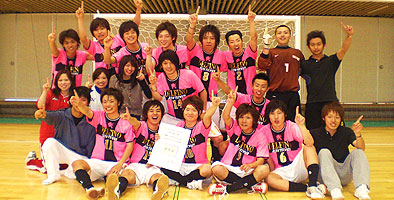