On Sunday September 14th, 3 members of the APU Tae Kwon Do Club: JI Young Ho (APM 4, Korea), GOTO Teruyuki (APM 3, Japan) and ITO Christopher (APS 2, Canada) participated in the "2nd National Tae Kwon Do Tournament, West Japan Tournament" held at the Nagasaki City Municipal Gymnasium.
JI Young Ho, who participated in the Feather Weight Division(62kg-67kg), won the semi final but due to an injury received in the semi final unfortunately had to withdraw from the final and received the bronze medal. Thanks to this result, however, Mr. JI has won the right to participate in the National Tae Kwon Do Tournament to be held in Tokyo on February 8.

After the match Mr. JI said "Every match was hard but through this event I was able to deepen exchange with people from Oita University, Ritsumeikan University, Nagasaki University and members of the region. Being able to make many friends is more valuable than any match. While keeping in mind the hardship felt when forced to retire at the final, I will practice hard and aim for victory at the National Tae Kwon Do Tournament".

The APU Tae Kwon Do Club was established in 2000 and currently is a Circle with students from over 10 countries and regions such as Korea, Japan, China, Vietnam, Thailand and Canada.

The 20 males and 15 females which make up the 35 members practice very hard 3 times a week. They work towards not only showcasing their skills at the spring semester Korean Week and the autumn semester TENKUSAI Festival but also participating in Tae Kwon Do tournaments. 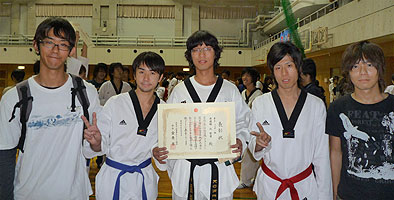