On Sunday September 21, The Kyushu Intercollegiate Road Race was held at the Ogori City Athletics Stadium in Fukuoka Prefecture. APU won in spectacular form to gain the right to appear at the National Road Race. 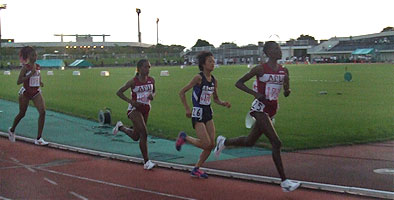 As well as APU, 7 other universities participated in the 5000m track race including National Institute of Fitness and Sports in Kanoya, Fukuoka University and Kyushu University. Each of the university team's total time was calculated as the sum total of each teams top 6 (out of 8) runner's times. APU won with a combined time of 1hour 41 minutes 23.2seconds. This result means that the team will represent Kyushu for the 8th straight year at the All-Nippon Ekiden Women's Road Race, which will be held on October 26 in Sendai, Miyagi Prefecture.

Looking back on the race, Coach of the Women's Athletic Team Mr. KITAYAMA said as he focused towards the All-Nippon Ekiden Women's Road Race "The international students have adjusted well. The domestic students weren't able to show their usual strength. However, all the members reached their target level and I think the result of all our training shows. There is a rhythm in a relay and we want to show the runners strength at the main event staying true to that rhythm. I'm expecting a good result". 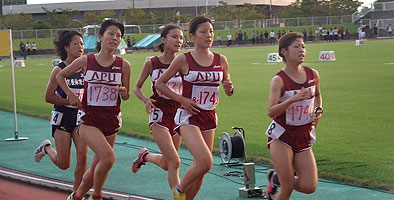