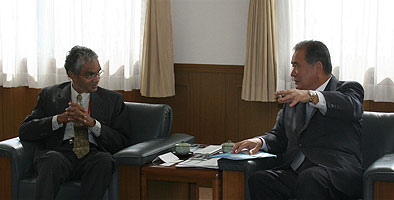 Chairman TATEISI is a member of the APU Advisory Committee* and has been providing support and cooperation to APU since its opening. On Wednesday October 1, Chairman TATEISI took time out of his busy schedule to visit APU after inspecting the Prince and Princes Hitachi Japan Sun Industries*.

During the conversation Chairman TATEISI gave his view as a business entrepreneur "Amongst a falling domestic population, the domestic demand for 'production' is predicted to fall. Focusing towards domestic and also Asian demand and looking at it as 'connected demand' is very important for the development of business. We hope to make use of the significant close proximity of Japanese businesses to Asia and contribute to the economy through the concept of borderlessness".
To which President CASSIM replied "There are students from over 80 countries and regions studying at APU and we have many students enrolled from Asia. I hope that they can participate in the development of the Asia Pacific region's economic development." President CASSIM also added "It has been pointed out by various Councils for Science and Technology that sensor technology will become very important in the 21st century. We have high expectations of OMRON, which excels in sensor technology".
Chairman TATEISI gave his lively view of future developments "The internet has people at both ends handling information but, the sensor networks of the future will have sensors at both ends handling various forms of information. In the days to come, a society which finds the perfect balance between human and machines will come – one where humans who can exercise creativity and decision making ability based on the information handled by sensors will be sought after".

Furthermore Chairman TATEISI gave his words of encouragement to the Indonesian International student who has received an unofficial job offer from OMRON starting from April 2009, who was also in attendance, by saying "The Company is a place where you can develop. Work hard towards your goal".

*Japan Sun Industries was jointly established with business under the motto "No Charity but a Chance" to provide a place where disabled people can work by improving the manufacturing environment through the application of science and technology. In 1972 OMRON became the first to establish a business with the establishment of OMRON TAIYO Co., Ltd (In front of JR Kamegawa Station, the closest to APU) followed by other companies such as Sony and Honda.
The Japan Sun Industries Homepage: http://www.taiyonoie.or.jp/
The OMRON TAIYO Co., Ltd Homepage: http://www.omron-taiyo.com/

*The Advisory Committee is an organization which has been supporting APU and was established in May 1996. The Committee is composed of ex heads of states and ambassadors, and representatives of the Japanese Economy and Industry sectors. It contributes in various ways to the education and development of APU. 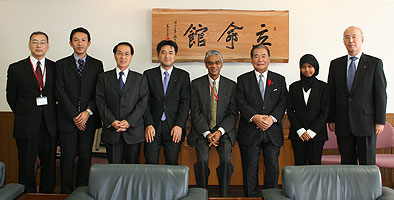