On Sunday November 9, 2008, the APU Wind Orchestra gave a min-concert at the JR Beppu Station B-Passage Central Square.Under an unfortunate rainy sky, the orchestra performed three pieces: "The Theme to Lupin the Third", Disney's "Fantillusion" and "Treasure Island". Many people passing by stopped to enjoy the orchestra's powerful and spirited performance. In response to the crowd's call for an encore, they played "A Cruel Angel's Thesis" -the theme to the animated TV series "EVANGELION" to end on a high note and draw the concert to a close.

The B-Passage Central Square, which is in front of the JR Beppu Station ticket gate and was the site of their performance, is used as a place to relax and has held a range of events such as live music performances, dance shows and tea ceremonies.

The APU Wind Orchestra was established in 2002 and currently has 60 members including international students. They rehearse 3 times a week mostly at the Multipurpose Hall. This was the 4th mini-concert they have given at the JR Beppu Station. They are currently rehearsing for the Annual Concert to be held in December in the Millennium Hall. 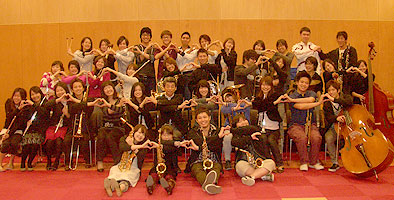