I want to begin by congratulating the new graduates, as well as their friends, family, and other guests here today. Today's ceremony celebrates the end of one phase of your life, just as it marks the beginning of the next.

The northern Japanese fishing town of Kessennuma has an event called shussen-okuri, which is held to send off fishing vessels that may sail as far as Africa. 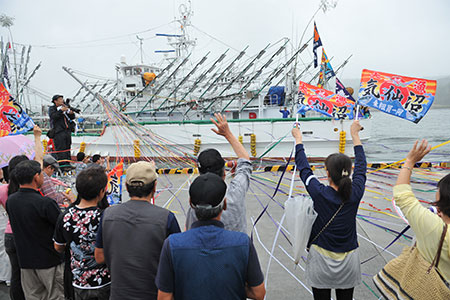 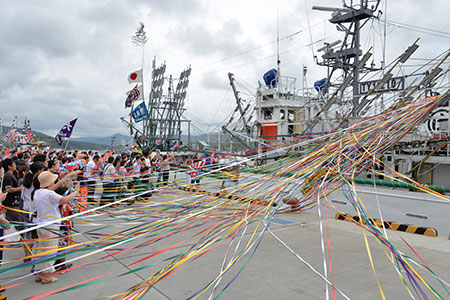 Before you step into the world, I would like to send you off with three things to think about.

First, understand that never before in the history of Japan has this much importance been placed on internationalization.

The first civilization in Japan arose not very far from here, in what is now Kitakyushu. It developed there because they were able to gain iron through trade with the Korean Peninsula. Having iron allowed the ancient Japanese to be much more productive with their agriculture.

The ability of animals to survive is limited by the resources around them. In spite of this, humans have managed to create rich civilizations by engaging in trade over greater distances. In other words, globalization is not a recent phenomenon, but something that began with the first human civilizations.

Advanced, industrial societies of the modern age were built on the three pillars of the Industrial Revolution: fossil fuels, iron ore, and rubber. However, these resources cannot be found everywhere.

This is why nations like the United States, which has these resources in abundance, can survive under an "America First" policy. Most of the world's countries, including Japan, do not have their own supply of these resources. As a result, they must rely on trade to create comfortable and affluent societies. I think this is the fundamental reason why such value is placed on globalization.

Second, I would ask you to keep in mind the APU 2030 Vision: "APU Graduates possess the power to change the world."

There are about 220 countries and regions in the world, with endless combinations of language and culture to be found wherever you go. We are all different, and because we are different, we must be mindful of diversity. Understanding diversity makes it possible, or at least easier, to communicate with people from all over the world.

Because APU attracts students from almost 90 countries and regions, I like to call this a "Young United Nations". As a graduate of APU you have come to understand diversity. This makes you well equipped to compete with graduates from any university around the world.

As you leave here for the far corners of the globe, I want you to remember the APU 2030 Vision. Remember that, by using what you have learned at APU, you have "the power to change the world". I think this amazing vision really embodies the slogan "shape your world".

The final thing I want to talk about is the importance of lifelong learning.

Learning does not end with graduation. I hope that once you leave here, you will continue learning for the rest of your days.

Just three years after the Meiji Restoration, when a framework for the new government was still in its infancy, a majority of Japan's leaders left to study overseas. Known as the Iwakura Mission, these leaders spent nearly two years traveling the world. Because of this, Japan was able to modernize rapidly.

People, books, and travel, I believe, are how we can learn. So going forward I hope you will continue to better yourself by meeting many people, reading many books, and traveling far and wide.

Never lose your thirst for learning! The more you learn, the more options you will have, and the more interesting your life will be.

Remember Kessennuma, and the fishing boats that spend six months or a year at sea before returning home? You, too, are welcome to return to APU at any time. You can also stay in touch by joining the APU Alumni Association, which now has 34 chapters all over the world.

Since APU's founding, over 16,000 students from 147 countries and regions have studied here. Never forget that you are all members of one big APU family, and nothing makes the family happier than seeing a fresh batch of new graduates ready to tackle the challenges that await them.

In closing, I leave you with these words:
Go where nobody has gone.
Do what nobody has done.

Know that all of us here at APU are cheering you on. Congratulations!