On Monday, September 9, 2013, Professor Ezra F. Vogel, a Henry Ford II Professor of the Social Sciences Emeritus at Harvard and an APU Academic Advisor* will deliver a special lecture under the title of “China’s Foreign Policy and Sino-Japanese Relations in the Post-Deng Xiaoping Era” to an audience of APU students.

Professor Vogel, who took Japan by storm with his book “Japan as Number One”, is also a long-time China scholar. With the current volatility of Sino-Japanese relations and Japan’s place in global society becoming less certain, Professor Vogel’s seminar is an opportunity to think about the future of the global community and our place in it. 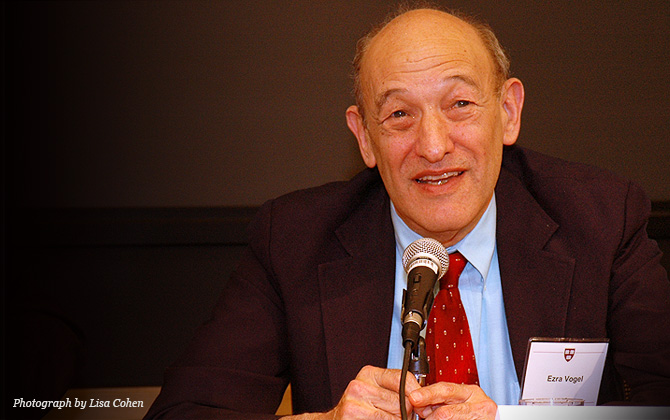 Ezra F. Vogel is Henry Ford II Professor of the Social Sciences Emeritus at Harvard University. After completing his Ph D at Harvard in sociology in 1958, he spent two years in Japan studying the Japanese language and the Japanese family. Vogel began studying Chinese at Harvard in the fall of 1961. He retired in 2000 and devoted a decade to study Deng Xiaoping.
Vogel became a professor at Harvard in 1967. At Harvard, he helped establish the U.S. Japan Program and served as its director. In 1972 he became John Fairbank’s successor as head of Harvard’s East Asia Research Center. He was director of Harvard’s Fairbank Center and the founding director of Harvard’s Asia Center. From 1972 he became founding director of the undergraduate concentration of East Asian Studies and remained in that position until 1990. He has received an Imperial decoration and awards from the Japan Foundation, the US-Japan Foundation, and a lifetime achievement award by the Boston Japan Society. He has received ten honorary degrees.
In 1993-1995 Vogel served during the Clinton administration as the National Intelligence Officer for East Asia on the National Intelligence Council. He is the only scholar from any country to have written a book on Japan that became a best seller in Japan (Japan As Number One) and a book on China that became a best seller in China (Deng Xiaoping and the Transformation of China).
*The Academic Advisors
The Academic Advisors support APU particularly for the advancement of education and research. The 48 members include Nobel Prize winning scholars and prominent researchers and individuals from educational fields in Japan and abroad. Academic Advisors are invited to APU hosted International Conferences and Special Lectures and through direct contact with students and faculty members they contribute to the vitalization of education and research.
Related Link: