To celebrate the 20th anniversary of the founding of the university, APU set up a temporary APU 20th Anniversary Special Exhibition display at Oita Airport. This special project was realized thanks to the cooperation of Oita Airport Terminal Co., Ltd., the managing entity for the Oita Airport passenger terminal buildings.

Designed to look like a small library or study, this temporary display booth focused on the themes of "people, books, travel," at the recommendation of APU President Haruaki Deguchi. The idea behind the book was to showcase APU and its place in the local community while expressing the appreciation of the university community toward Oita Prefecture and those who use the airport. Mr. Koji Morioka '12, founder of company Renobeya in Oita City was involved in the design and creation of the booth.

Inside the space, APU-related goods related as well as writings by President Deguchi, APU faculty, and APU alumni were on display. 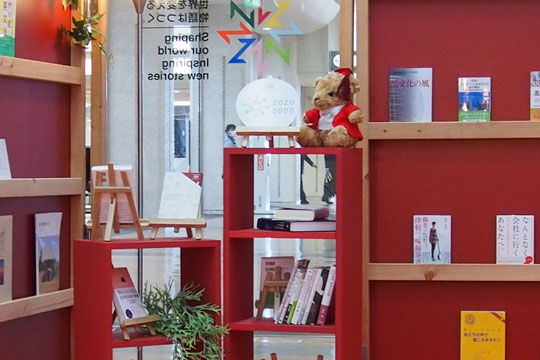