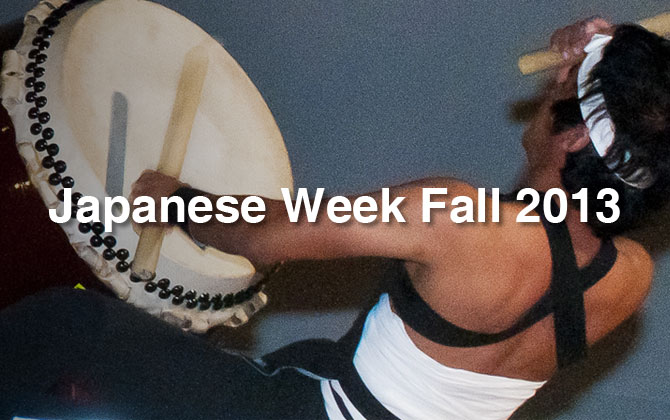 From January 20 until January 24, 2014, the Japanese Week was held at APU. A delicious array of traditional dishes was available on the cafeteria menu in addition to traditional dance and music performances held throughout the campus and the Grand Show held on the final day of the week.

Hello everyone! My name is TOME Kazunari, the leader of Japanese Week 2013. Our theme for this year is ‘The Spirit of Japanese Hospitality’, and we have prepared a wide variety of hand-on events that everyone can enjoy. We hope you will gain a better understanding of traditional Japanese crafts by stopping by our display of New Year's games. There are also some traditional foods on the menu in the cafeteria. This year, we have taken a new approach to the Grand Show. Entitled "Keiou Kairai: Respect the Past, Create the Future", the event will feature a professional kabuki dancer and shamisen player invited from outside the university. Don't forget to stop by the Pacific Cafe to try your hand at calligraphy, tea ceremony and shamisen. We want everyone, especially international students, to experience Japanese traditions first-hand. With Japanese Week 2013, it is our hope that everyone involved—the organizers, performers and you the audience—can learn more about Japan's traditions and experience the spirit of Japanese hospitality.