On Tuesday November 5, 2008, students from 57 countries and regions attempted to break the Guinness World Record for "the most nationalities in a spa at the same time" at the Yamanaminoyu Spa in Beppu City.Under the theme of "No Border, Naked Body, Now Brake" the participants had to squeeze into a cramped room, standing up, with a temperature of over 80 degrees C. for 5 minutes for the record to be recognized. The broke the previous record of 50 nationalities held set in 2007 by Niigata Prefecture university students, in fine form to overtake the existing record by 7.

Representing the planners of this project, HAYASHI Hidetora (APM4, Japan) spoke of his happiness at achieving the record and of his future ambitions: "We made this record attempt to introduce the charms of Beppu to the world. When we broke the record we all shared the joy of the moment and I felt that there are truly no borders to friendship. I want to continue to provide information on the web-site we are running and plan more events aiming towards regional activation".
There are currently students from 87 countries and regions studying at APU, and this Guinness Record has made good use of APU's uniqueness.

This Guinness Record attempt was planned by students who are running the "BEPPoo!!" internet portal which provides information about Beppu. BEPPoo!! has to date running activities such as the manufacture of eco-bags and free distribution, based in Beppu, aiming to make a contribution to the region from a student's standpoint. 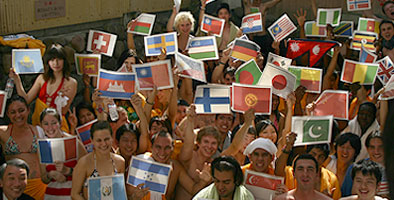