On Wednesday December 3, 2008, a Risk Management Seminar was held for groups who participate in overseas tours. 23 groups such as PRENGO, Habitat APU and Wadaiko "Raku" participated. 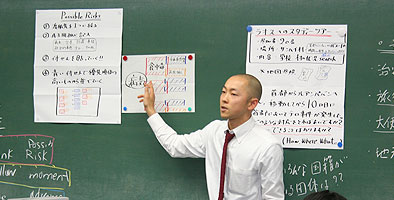 The seminar welcomed Japan International Cooperation Agency, Kyushu Centre (JICA Kyushu), Promoter of International Cooperation, TSUBAKI Daisuke as a lecturer and took the form of a workshop. Each of the participating group was given a situation where "a terrorist attack occurs during a study tour in a village 10 hours by bus from the Laos capital". Each circle then exchanged opinions about what they should do in this situation and what they could do beforehand to prepare. Ideas such as "contact the embassy" and "try to get as far away as possible from the site" were suggested as possible responses to the situation which received replies such as: "but many of the embassies are in capital and there is the chance that they might not be functioning", "If we were a group with multiple nationalities, would the Japanese embassy provide an adequate response for the non-Japanese students?". This lead to more in-depth questions being raised and the students actively exchanged their opinions.

There was also an explanation of vaccinations one can take before traveling overseas by the APU Health Clinic and the students learnt not just about incidents, crime and terror, but also about the importance of measures against sickness.

Eleven groups at APU have gone overseas for circle activities and study tours etc. during AY2008. On the other hand, the state of the world is increasingly unstable, for example the occupation of a Thai airport and terrorist attacks in Mumbai. Therefore it is necessary to participate in overseas excursions which are aware of the risks. Through this seminar the students examined the risks of going overseas and our appropriate responses. It was as an opportunity to acquire the know-how needed to have a safer overseas excursion. 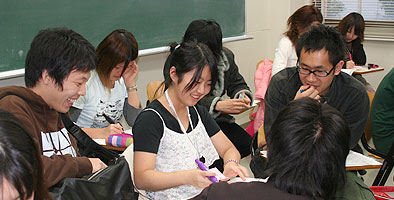