With the conclusion of the Taiwanese Week (Tuesday, January 13 -Friday16) Final Performance, the curtain came down on the AY2008 Multicultural Weeks. 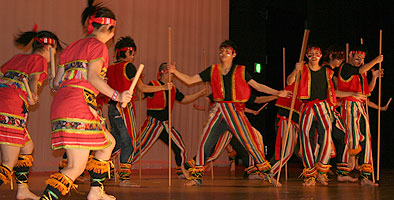 Multicultural Weeks introducing culture and language through national cuisine, songs and dance are held every year at APU which through the spotlight on different countries and regions of the world. Five countries and regions were introduced in the Spring 2008 Semester such as China and Thailand. In the Fall Semester the spotlight was put on Latin America, Mongolia, Japan and Taiwan as they were introduced one by one. Taiwan, which made its debut Multicultural Week appearance, appeared as the last region to be introduced for the year.

The theme of the Taiwanese Week Final Performance was "A trip around Taiwan". The audience was greeted at the entrance by members dressed up as cabin attendants and a Taiwanese tour company publicity video was shown. There were also imitation in-flight announcements which produced an atmosphere in which one would swear they were on a trip around Taiwan. Students who participated in Taiwanese Week gave a welcome dance wearing the costumes of 14 tribes such as the Puyuma and Atayal as they introduced the different indigenous tribes of Taiwan.

There were also performances of Taiwan's traditional music and folk ballads, modern dance arrangement and Taiwanese Pop songs. One of the performers spoke of his impressions, "We came together with people of all nationalities to put this performance together. I think that it was a wonderful experience for me to feel the greatness of APU." An audience member said that the performance was just like the real thing, "I'm very glad that I was able to experience the contemporary Taiwanese culture, rich in variety."

Through the Multicultural weeks APU, with students from over 87 countries and regions, aims to:
*Build up student's awareness of different cultures
*Nurture intercultural communication ability
*Establish student's identity through expressing the culture of their home country or region
*Create different country/region networks 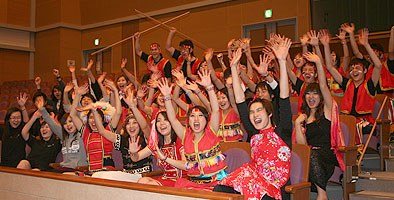