On Wednesday July 22, 2009, the "7th APU Business Plan Contest" was held for APU students. The 10 teams who made it through the first round presented their plans made up of their ideas.
From a standpoint of creating new ventures, the Business Plan Contest aims to work with industry and the region, and make a contribution to regional society –one of the fundamental goals of APU. Held every year since 2003, the contest is an opportunity to gain the practical conceptive, planning, leadership and negation skills sought after in the real world. APM Professor NAMBA Masanori, APM Professor TSUCHIYA Ryuichiro and Mr. TESHIMA Hideo of Oita Venture Capital Co., Ltd. –who was welcomed as the external panelist –judged the plans from a comprehensive standpoint including the possibility of the plans being realized.

At the presentation the 10 teams gave their presentations about their business plans like businessmen, making good use of PowerPoint. The students then were asked questions and received practical advice from the panelists towards the realization of their plans.

At the award presentation each group was appraised by members of the panel and received their awards which were presented by APM Professor NAMBA Masanori. After an impartial deliberation, KITAGUCHI Takanori (APM3, Japan) represented his team was presented 1st Prize for their "Home Tutors teaching questioning skills –Home Learning Support Service nurturing the ability to ask `why?'"

Furthermore, at this year's Business Plan Contest, five members of the student circle SMiS gave management support. SMiS, which aims to nurture capable human resources who can help society, also created a business plan, participated in the contest and is involved in nurturing student entrepreneurs. 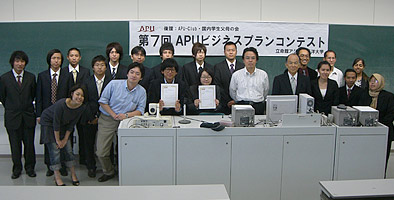