On Thursday 4 and Friday 5 of March, 2010, the First International Expert Group Meeting of MEDSYN ASIA 2010 was held at APU under the sponsorship of the Japan Society for the Promotion of Science (JSPS). Inviting professionals and research experts from around the world in the field of medical and health sciences, information and communication sciences and other related technologies, this meeting was convened by former APU President Monte CASSIM through the cooperation of Prof. Parakrama CHANDRASOMA of the University of Southern California, Keck School of Medicine. 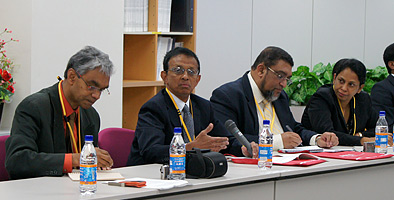 It may be seen as the first step towards the creation of an Asian science community where scientists can freely interact with each other in addressing the front-line challenges facing the Asia-Pacific region and the wider world.

This, the first meeting of MEDSYN ASIA, focused on gastroesophageal reflux disease (GERD) and the establishment of GERD Centers throughout Asia and other parts of the world to monitor the disease using a common baseline protocol. Without proper identification and treatment, GERD can develop into "Barrett's Esophagus（＊）", an abnormality caused by prolonged damage to the esophagus from exposure to stomach acid which can then lead to Esophageal Adenocarcinoma (cancer of the lower esophagus).

Professor Parakrama CHANDRASOMA and his colleagues at the University of Southern California, Keck School of Medicine, have developed a method to identify GERD in patients and track its progression and regression at the cellular level. This method has since been duplicated in the first GERD Centers in Vienna under Dr. Martin RIEGLER, and in Sri Lanka under Dr. Sulochana Wijetunge and Dr. Chandima Halahakoon.

Following the success of these initial GERD Centers, the meeting of MEDSYN ASIA 2010 aimed to lay the groundwork for further GERD Centers to be set up throughout the world and the establishment of GERD Net an international information exchange platform which will make the invaluable findings and data available throughout the entire network of GERD Centers for real-time exchange and analysis.

Looking back on the inaugural MEDSYN ASIA meeting, Dr. CHANDRASOMA spoke of his aspirations for the project, "I hope we succeed in propagating further GERD Centers throughout the world, can preempt an Esophageal Adenocarcinoma epidemic in Asia and that we can support and nurture the development of an Asian scientific community. I also hope that APU serves as an informatics hub for the use and analysis of data gathered from the GERD Centers."

This project was funded by the Japan Society for the Promotion of Science under the Flexible International Exchange initiative, which is one of the components of a broader initiative for the creation of an Asian Community of Scientists.
"It is hoped that APU can actively contribute to this strategic international initiative by the Government of Japan", sentiments expressed by Professor CASSIM, in his closing address. APU also wishes to take this opportunity to thank the corporate sponsors who supported this project. 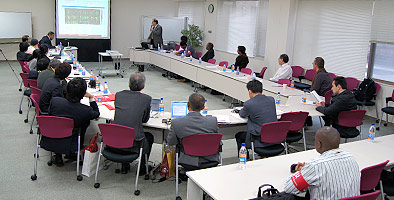