On Wednesday, May 26, 2010, the former United Nations Undersecretary-General and current Representative of the Government of Japan on Peace-Building, Rehabilitation and Reconstruction in Sri Lanka, Mr. AKASHI Yasushi visited the campus and met with APU students. Approximately eighty APU students came along to hear from Mr. AKASHI and his experiences and ask questions about his time at the frontlines of international society. 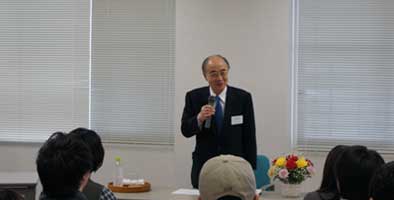 Mr. AKASHI began by talking about his experiences of working towards the resolution of the civil war in Cambodia and conflicts in the former Yugoslavia. The student audience raised a number of questions to the UN Undersecretary-General such as, "what was achieved under the United Nations Transitional Authority in Cambodia (UNTAC) in 1992?", "What needs to be done to make a success of the 2010 Nuclear Weapon Non-Proliferation Treaty Conference?", "How should we respond to the issue of US military bases in Okinawa", and "What do you think of young people getting involved on the frontlines of international society?". Mr. AKASHI kindly went over the time schedule by more than an hour to answer the students' questions.

One participant in the discussions, HING Kim (GSAM1, Cambodia), passionately commented, "It is a great honor to be able to hear from a gentleman who worked at the very forefront of initiatives to develop a lasting peace in Cambodia as the representative of UNTAC. In the future I hope to work for the United Nations on the global stage". 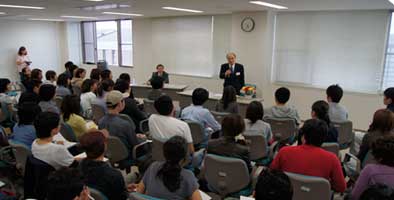 Facilitator of these discussions, APU Vice-President YAKUSHIJI Kimio commented on the event, "This was a great opportunity for our APU students to hear from Mr. AKASHI and his experiences around the world. I hope that this discussion instills in our students the drive and inspiration to consider what they can do for international society".

This discussion with the former UN Undersecretary-General, who is also a member of the APU Advisory Committee*, was held to coincide with the Advisory Committee (AC) Thanksgiving Gathering and proved to be a wonderful opportunity for our students aspiring to work on the frontlines of international society.


*The Advisory Committee
Established before the university opened, the Advisory Committee aims to provide multifaceted support to the University and currently has 326 members (as of March, 1, 2010) including former heads of state of nations around the world, ambassadors, and leading figures in the Japanese business and economic circles. The Committee continues to make a range of contributions to the development and enrichment of study and research at APU. 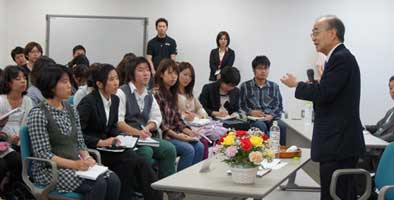