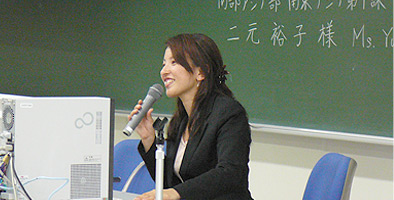 Ms. FUTAMOTO introduced the structure and role of the Ministry of Foreign Affairs and, with the use of photos taken during her time as a trainee in the country, described the culture of the Lao People's Democratic Republic - the country she primarily works with. Describing the Japan-Laos relationship, she outlined how the Japanese Government has identified Lao's strategic importance in the Mekong Region* and the support and infrastructure development projects underway to address the economic gaps that exist among the ASEAN countries.

Ms. FUTAMOTO also spoke of her role at the Ministry of Foreign Affairs: "As a student I majored in international politics and my goal was to get a job where I could deal with international relations from the Japanese perspective. I therefore aimed for the Ministry of Foreign Affairs. After two years of intensive training in the Laos language, I deepened my specialist knowledge, but I also became a specialist in my field. Most of my job is left entirely up to me so the job carries with it a heavy responsibility – a level of responsibility that demands the mental and physical stamina to cope with it. However, it is not a sexist job – men and women are treated equally – and it is a very meaningful and attractive job that enables me to build up and utilize my experiences and knowledge".

Approximately seventy domestic and international students came along to this seminar which was held in both English and Japanese. Members of audience commented, "It is difficult to get detailed information about this kind of job from magazines or the internet so I was very glad to have the opportunity to hear first-hand from someone working in this field", "I learnt that there is more variety than I thought to the work of the Ministry of Foreign Affairs and that they approach diplomacy from a number of angles".

*The Mekong Region
Situated in Southeast Asia and consists of the five nations situated in the Mekong River area: Cambodia, Laos, Myanmar, Thailand and Vietnam 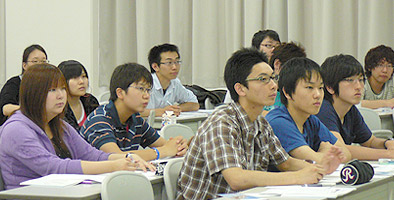