On Saturday, November 26, 2011, the Ambassador Extraordinary and Plenipotentiary to Japan from the Republic of Korea, Dr. Shin Kak-Soo, visited APU to attend the 2nd IAAPS Annual Conference. During his time at APU he also met with APU President KORENAGA Shun, Vice-President YAMAGAMI Susumu, and offered a message to APU students.

During their meeting, the group discussed the current economic and geopolitical situation in North-East Asia focusing on the relationship between Japan, Korea and China. Following their discussion, Ambassador Shin Kak-Soo offered a message to current APU students. “I have heard that the name ‘Ritsumeikan’ means the place to establish your destiny through learning. I hope that your generation will work together to establish the destiny of an integrated and prosperous Asia-Pacific region”.

The Ambassador also encouraged students from China, Korea and Japan to resolve historical differences and work towards greater exchange and interaction. “It is important for young people in these three countries to face up to our unfortunate past and reach a consensus on our understanding of history. Don’t distort and don’t disregard our history. History is the mirror for our future and the only way towards reconciliation among these three peoples will be through a correct recognition of history. Of course we should not just remain mulling over the past, indeed, we must look forward toward a brighter future together and I look toward your generation to achieve it”.

APU currently hosts approximately 700 students from Korea and continues to enjoy a strong relationship including affiliations with over 30 Korean universities and institutions. 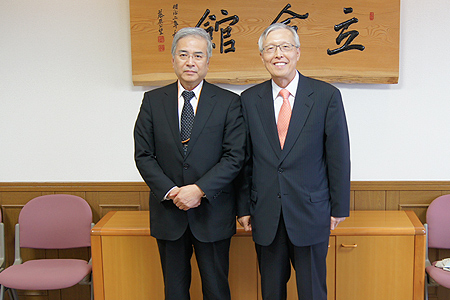