On Friday, January 20, as one of the events during African Week, APU welcomed Mr. MIZUTA Shinichi (Researcher of Mitsubishi Research Institute) and Mr. Jeremie Dongala (Gabon Embassy Department of Economy and Commerce) to give a lecture on "TICAD (Tokyo International Conference on African Development) and the differences and similarities between Japanese development and African development." 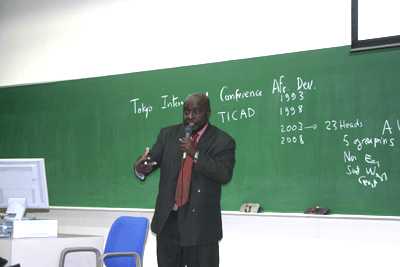 Mr. Dongala emphasized the institutionalization of the TICAD process. He proposed to set-up a TICAD Office in Tokyo and to not only work on internationalization but to concentrate efforts on achieving mutual understanding between Africa and Asia.

Also, Mr. Mizuta pointed out the major destinations for African export is to Europe, the United States of America and Asia respectively, but the greatest rise is in relation to Asian countries. Therefore, the role of Asia in the future of African economics will be significant.

The lecture was attended by not only international students of African descent but students from other Asian regions including Japan. Some of the questions asked by the students include: "What has been the biggest challenge of TICAD up to date?" and "What is the history of TICAD – How was it formed?"

TICAD homepage can be viewed at: http://www.ticad.net/whats_new.html 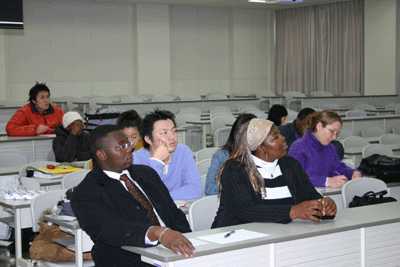