For students who have a keen interest in the activities of international organisations, a 7-week "International Organisation Relay Lectures" program is being held at APU on topics such as International Politics, Economics and Human Rights. 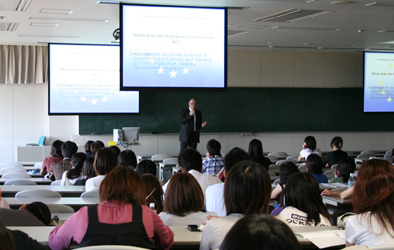 The 2007 series of lectures began on Tuesday 2nd October and for the first lecture, a speaker from the Delegation of the European Commission to Japan, Mr. Peter VAN DEN HEUVEL, was invited to talk about the structure of the European Union and the objectives the EU hopes to fulfil in order to further unite the countries of Europe.

Ms. UTSUNOMIYA Akari (APS4, Japan), who attended the lecture, commented as follows, "I studied at a university in Denmark for one year as an exchange student and during my time there I became interested in immigration issues facing many European countries. By learning about the policies and efforts of the European Union regarding these issues, I believe that we can begin to relate them to our lives in Japan. Through the International Organisation Relay Lectures, we can hear directly from those people working in that particular organisation and this is a great learning experience. I also want to attend the other lectures in the coming weeks in order to acquire the knowledge necessary to develop communication channels with the people of Asia and Europe".

In the weeks ahead, the following six organisations will come to the university to lecture on various business roles, problems and current conditions. 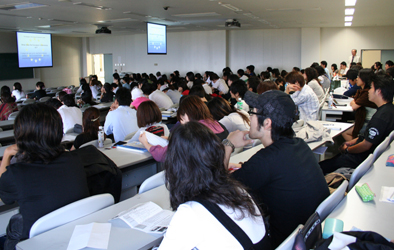