The first 'Multicultural Week' of the fall semester, "Japanese Week", was held from Monday 3rd to Friday 7th December 2007.With students from over 82 different countries and regions around the world at APU, the 'Multicultural Week' is held to introduce the languages and cultures of this diverse range of countries.

Many events were held on the first day of Japanese Week, including a photo and calligraphy exhibition on the first floor of the Student Union building. The theme of Japanese Week 2007 was the 'Four Seasons' and on display around the campus there were various decorations, including banners in the form of silhouette motifs and Japanese drawings and paintings to create an air of traditional Japan.

On Friday 7th December, the last day of Japanese Week, there was a grand performance in the Millennium Hall, which included a performance by the Syamisen Band and a joint performance of tap dancing and ancient Shinto music known as 'O-Kagura'. 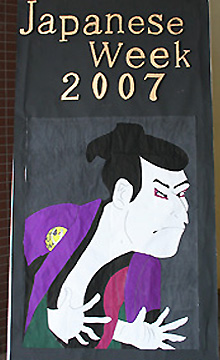 The schedule for Japanese Week was as follows: