A seminar entitled "African Regional Industry Promotion" offered by the Japan International Cooperation Agency (JICA) on the concept of the One Village One Product (OVOP) movement was held in APU from 24th March to 11th April 2008. APU welcomed 17 government officials from Africa for training in "Community Capacity and Rural Development for African Countries", and as part of this training, a group discussion was held on campus on Wednesday 9th April.As trainees in the concept of OVOP, the government officials undertook more than two weeks of training on various topics such as capacity building in local communities and methods for effective use of local resources, coupled with field visits to some of the Oita villages where the OVOP movement is flourishing. After this, the trainees were ready to discuss what they had learned in order to determine how to implement the OVOP concept in their own towns and villages in Africa.

For the group debate, the trainees divided into two groups, and after choosing a district in Africa as an example, they first identified vital factors such as the village and the product targeted for intervention. They then engaged in a lively brainstorming session to create a viable plan for the rural development of that area and its local product. The debate was followed by a presentation of each groups' findings and all the trainees concluded that the end result of OVOP implementation should improve the living standards and the future of the village and its people as a whole.

For the final few days of the seminar, the participants remained on campus at AP house to work on an action plan for the implementation of the OVOP concept in their own countries.

APU continues to support the OVOP movement by way of research related activities, reporting the outcome not only throughout Japan, but also to countries overseas through training courses and seminars such as this one. 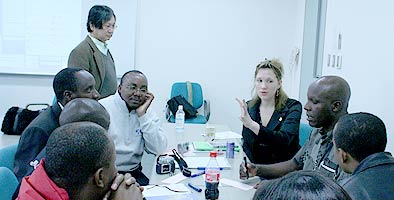