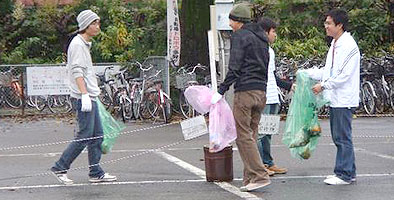 The APU registered student body LovEarth was established in spring 2007 and is a circle which carries out regional volunteer activities with the aim of exchange with the citizens of Beppu City and other areas. Volunteer activities such as exchanges at facilities for disabled people, clean-up projects around JR Beppu Station and study groups to look at the differences between different countries' and regions' volunteer activities are some of the wide range of activities LovEarth has been involved in to date.

The BEPPU CLEAN PROJECT was planned aiming to make a contribution to the region by carrying out clean-up activities as a way of thanking the people of the region and streets of Beppu which for a long time have provided kindness and support. Approximately 30 students from 9 countries and regions, including international students, were recruited on campus before the project was carried out.

On a day scattered with light rain, the participating students eagerly picked up rubbish from around JR Beppu Station, Kamegawa Station and the Beppu Kanko Ko. They collected a total of 12 bags of rubbish. Looking back on the clean-up, project planner SUZUKI Mariko (APS3, Japan) spoke of the result of this activity and her ambitions for future activities "Both international students and Japanese students participated in this event and this lead to exchange between ourselves and with the region. There were many people who said that they really want to participate and we hope to plan a large scale clean-up project in the future in which Beppu citizens can also participate."

We hope that exchanges between APU students and the region develop even further and also that it leads to the activation of the region. 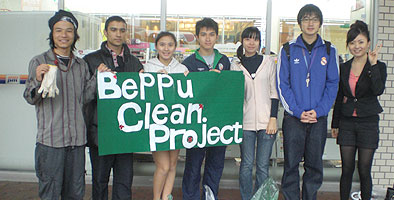