During the 2020 fall semester, I joined a domestic exchange program at Ritsumeikan University. I hope this article on domestic exchange, which allows you to study at a partner university even during the pandemic, will help you identify new possibilities for your life as a student.

To be honest, the main reason I applied to the domestic exchange program was because I had concerns about whether it was meaningful to stay at APU since the campus no longer had the diversity which, until last year, I had taken for granted. It was when I was toiling over these concerns in my heart that I learned the application process for domestic exchange was underway. This piqued my interest and made me want to test myself in a new community.

While researching papers published by the professors at Ritsumeikan, I learned that there was a professor considered the leading researcher in the field of comedy, which is what I wanted to study. In fact, I was part of a manzai comedy duo in high school, and I initially thought I would pursue that path after graduation. I decided to go on exchange when I realized that I could get involved in manzai again in a place where there were professors and students studying the subject.

What’s more, I was drawn to the prospect of taking classes in philosophy, which APU does not offer. Ever since I was little, I have had a profound fear of the fact that I am alive, and I always avoided thinking about this fact objectively. Domestic exchange would give me the opportunity to tackle this topic academically.

First of all, I was able to complete my first goal of joining a new community, and consequently, came to realize that I would be fine if I stayed at APU. This is because going to another university made me realize that what is important is not the name of the university or the campus environment, but how you approach your studies and what activities you decide to undertake. It’s true that due to COVID-19 students have not been able to reap the benefits of the campus environment that they expect from APU; however, this only extends to diversity on the physical campus. APU provides students opportunities to tap into diversity in online settings as long as you apply yourself proactively. For example, by posting actively on social media and other online forums, I was introduced to APU students involved in the same field as me whom I would have never met just by spending time on campus.

Furthermore, with regard to comedy, I was able to join a small-group seminar taught by the professor whose papers I read before going on exchange, and he took me under his wing. I enjoyed analyzing comedy from an academic point of view, which is something I had never done before.

Finally, with regard to philosophy, I was not able to study everything I wanted to study in just one semester. In fact, the pace at which I learn and the pace of the class did not often mesh. But that is something else I learned about myself, and I decided to study philosophy at my own pace over the long term.

Before going on exchange, I did not expect to meet such a wonderful and diverse group of people. I took a Liberal Arts Seminar class in which we worked on group projects with classmates from different disciplines and different school years. Engaging students who have been undertaking their respective major studies in discussions served to deepen my own learning. I became friends with my group members, and we still contact each other regularly by video chat.

Compared to APU, whose ties with other universities in Kyushu are weak, at Ritsumeikan, I was also able to meet and interact with a wide range of students from other universities in Kansai. Mostly, I met students from Doshisha University, Kyoto University, and Kwansei Gakuin University. Talking to them made me realize just how much more information they had about job hunting than APU students. This led me to develop a sense of urgency about searching for a job, which was something I had not started to think about seriously until then.

Finally, by spending six months at International House Tokiwa, Ritsumeikan University’s international dormitory, with around 10 other students, I was able to make great Japanese friends who I hope to stay in touch with for a long time. At APU, I spent all my time with international students, so here I was able to discover a different venue for communication by living somewhere else where I could make friends with other Japanese people. Plus, there was no need to worry about whether the host institution would accept me. 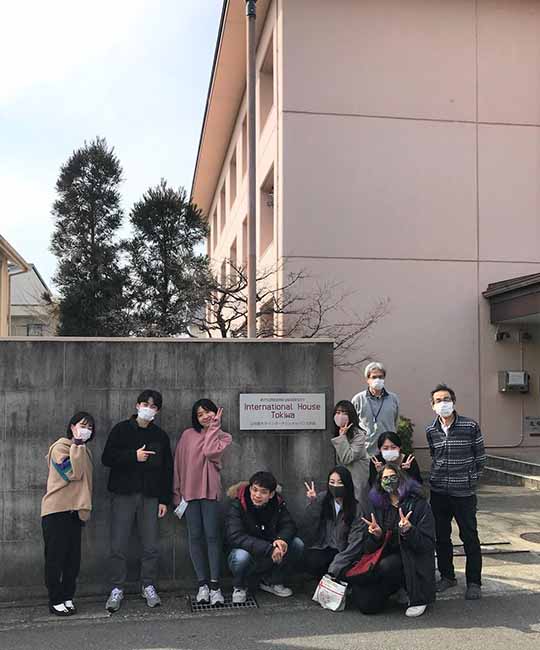 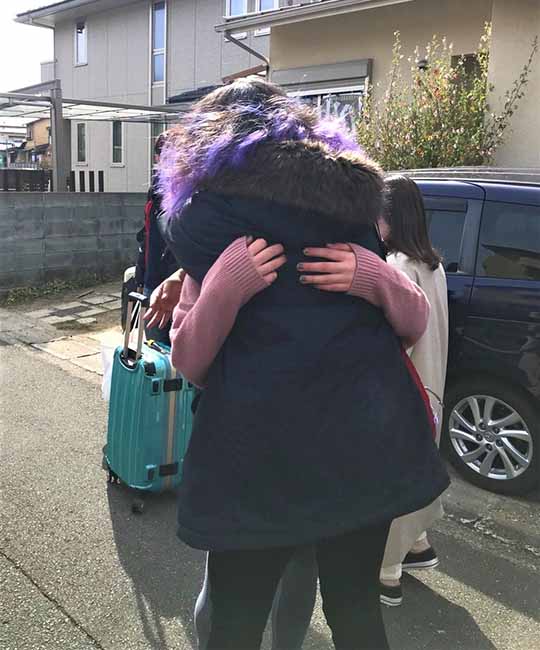 (photo) Leaving Tokiwa I-House. Everyone was crying because we had just lived together for six months.

Due to the pandemic and the various restrictions we face, I think there are many students who are struggling with how to deal with the gap between the future they envisioned for themselves and the reality of their current situation. It is precisely because of these circumstances, however, that you might want to consider adding domestic exchange to your list of study options. You might have experiences and encounter possibilities you would have never even dreamed of! 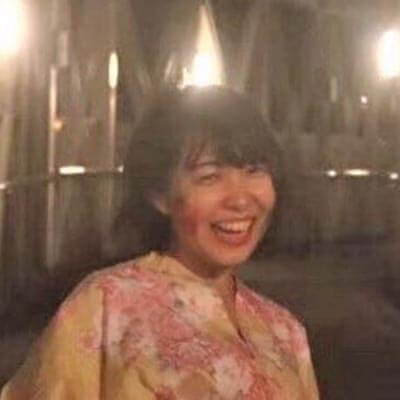 Nice to meet you! I am a fourth year APS student who loves to try new things. I am 100% Japanese with no experience studying abroad by Japanese standards. I want to have academic conversations with my international student friends, so I'm taking advantage of quarantine to study English! Once things turn around, I'll be back on the road to various places~! Best regards.