On Wednesday, January 23, 2013, first and second year Iwata Senior High School students on the Iwata Academy/APU Course held a presentation and debate event to display the results of their time on the program. 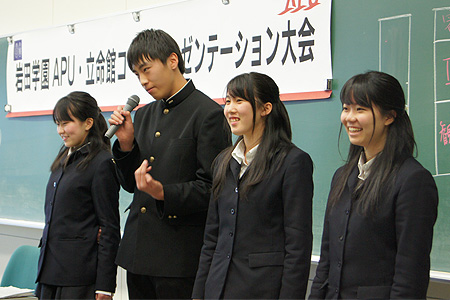 Divided into four groups, the first year students gave presentations in English about Fair Trade, Starbucks business practices, and other issues relating to international business. Also divided into four groups, the second year students then held a fierce debate on the topic of whether or not Japan should join the TPP. In a new addition to the event, the debate considered Japan’s participation in the TPP from both affirmative and negative positions. The venue was tense as the students pulled no punches, clawing into the opposition’s statements and counter arguing with piercing questions.

At the end of the event, a closing ceremony and certificate presentation ceremony were held to award the winning team and individual presenters and debaters. The winning presentation was entitled “The Trade of Music” and focused on business opportunities through music. The debate prize went to the negative team who argued that Japan’s participation in the TPP would lead to the continuing decline of Japanese agriculture and would also to concerns about food safety. 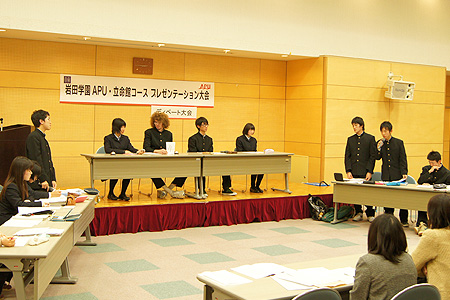 The audience at the closing ceremony was addressed by Professor WATANABE Ikunosuke (APU Education Development and Learning Support Center) and Mr. TERUKAZU Naruse, Chairperson of the Iwata Academy Board of Directors, who both praised the students’ efforts. The ceremony was also attended by APU and Iwata Academy faculty involved in the program, parents, caregivers and APU students. 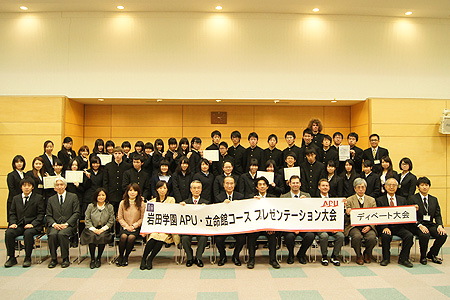