On Wednesday, February 6, 2013, Director of the APU Asia Pacific Innovation Management Center (AP-IMAC), Professor NAKATA Yukihiko, delivered a keynote speech at a symposium under the theme of ‘The commercialization of renewable energy and the Tohoku recovery – What can be learnt from regions adapting solar power technology?’ This symposium was hosted by the Tohoku University Graduate School of Economics and Management and was held at the Tohoku University Kitahira Campus Sakura Hall. Approximately 140 people attended the event. Prof. NAKATA Yukihiko also serves as a Professor at the APU College of International Management. 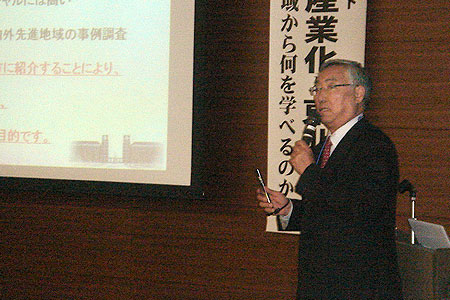 A panel discussion was then held on the theme of ‘What can be learnt from regions applying solar technology?’ during which Prof. NAKATA shared his opinion on the possibilities of disaster relief projects utilizing renewable energy.

Prof. NAKATA is currently working with the Tohoku University (Miyagi Pref.) Tohoku Earthquake and Tsunami Disaster Relief Project and also the Renewable Energy Commercialization Support Project, set up in April 2012. Prof. NAKATA’s involvement in these projects includes joint investigation by APU and Tohoku University into the possibilities for the renewable energy sector in the Tohoku region and aims to stimulate the creation of new industries. His involvement is based on his research into, and analysis of, renewable energies, particularly the solar energy sector. 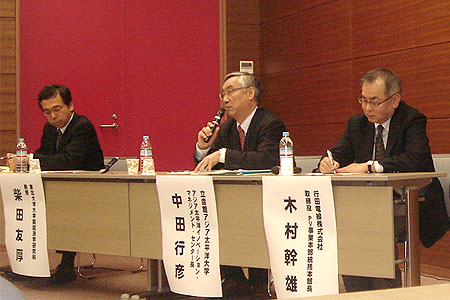 APU is situated in Kyushu, a region known throughout the country for its solar power infrastructure. With the highest annual output of hot spring water in Japan, geothermal power stations have been established in Oita Prefecture, adding to its status as a leading renewable energy region. However, the provision of a safe and stable energy supply has been identified as a pressing national concern and this project, and the possibilities for renewable energy generation that reflects local characteristics, continues to attract the attention of municipalities around the country.