The 2013 Professor Emeritus Title Conferral Ceremony was held Monday, April 1, 2013, in the Conference Room at B-Con Plaza in Beppu City just before the Spring Entrance Ceremony.  At the ceremony Professors A. MANI, KO Yiu Chung, MIYOSHI Koichi and MANOPIMOKE Supachit of the College of Asia Pacific Studies, Specially Appointed Professor MUTO Koji of the College of International Management and Ritsumeikan University Professor Monte CASSIM were awarded the title of Professor Emeritus by APU President KORENAGA Shun in recognition of their educational and research achievements. 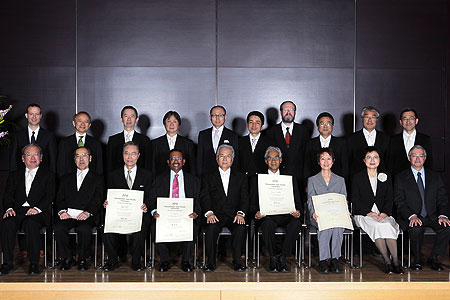 Professor Emeritus MANI has been serving the University since its inception in 2000 and is one of our dedicated faculty members.  He has been involved at both the graduate and undergraduate levels and has been one of our most active professors at the Ph.D. level.  He also has served as RCAPS Director and as a University Vice President, among other posts, and made many contributions to the development of APU.

Professor Emeritus KO has been serving the University since 2001 when he joined the faculty of the College of Asia Pacific Studies as a professor.  He has been conducting sociological research focused on China and Southeast Asia for many years and published a book on Work Stress and Coping among Professionals in 2007.  He also has a rich list of published articles, the most recent of which was published in the Journal of Social System Studies in 2012.  He has made many contributions to the development of the University in the research and teaching fields.

Professor Emeritus MIYOSHI has been serving the University since 2003 when he joined the faculty of the College of Asia Pacific Studies as a professor.  He is one of our dedicated faculty members who has been active in teaching at both the graduate and undergraduate levels.  His research field concerns community and rural development, he has published five books and also has a rich list of published articles.  Through holding important posts at the University and also playing a key role in carrying out the short term JICA Training Program, he has contributed to the development of the University.

Professor Emeritus MUTO has been serving the University since 2001 when he joined the faculty of the College of Asia Pacific Studies as a professor.  He has taught International Trade, Commerce in the Asia Pacific Area, etc., and has also been conducting research regarding an analysis of the economic climate in Islamic economic regions.  After becoming a specially appointed professor in April 2008, he has promoted research on Islamic finance, and also has provided a great deal of support to exchange students from Saudi Arabia in adapting to life and studies in Japan.

Professor Emeritus CASSIM was appointed as president of APU in January 2004 and served two terms in this capacity for a total of 6 years.  This period was the start of the New Challenge which focused chiefly on expanding APU and he poured a lot of effort into developing this project.  Additionally, he contributed to the development of APU through actively undertaking outreach activities; as a result, during his tenure APU’s reputation in Japan as an international university grew rapidly.

Professor Emeritus MANOPIMOKE joined APU in 2001 and concentrated on research in the medical, environmental and sustainable development economics fields.  She authored many publications and gave many research presentations.  She also made many contributions to the administrative side of things in developing APU into what it is today.  Most recently, as the APS Environment and Development Cluster Leader, she supported the 2011 curriculum reform.

The title of Professor Emeritus has been conferred in accordance with the Ritsumeikan Asia Pacific University Regulations for Professors Emeriti to those who have contributed outstanding educational and / or research achievements to the University.  APU has conferred this title on 20 individuals, including this year’s awardees:  Professors Emeriti MANI, KO, MIYOSHI, MUTO, CASSIM and MANOPIMOKE.