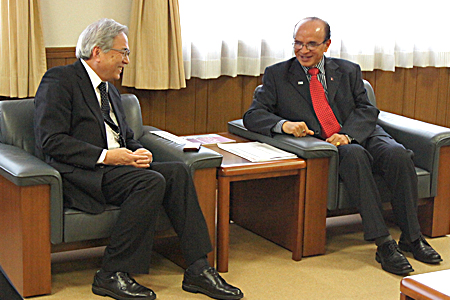 During their discussion, President KORENAGA welcomed the Ambassador, described some of the features of APU including the flexible entrance system, and inquired about Nepal’s relations with its large neighbors, China and India. In response, Ambassador Bhattrai commented that, “Although Nepal is neighbored by two very big countries, India and China, we have enjoyed a constructive relationship with Japan over the last 40 years. The number of Nepalese in Japan is increasing and we now represent one of the largest Southern Asian populations in Japan, including approximately 3000 students”.

Pro-Vice President PORTER then described the achievements of some of APU’s outstanding Nepalese graduates and Vice-President HIRATA inquired about the career paths of Nepalese students in Japan after they graduate. The group then talked about the relationship between Japan and Nepal including the achievements of Japanese mountaineer MIURA Yuichiro whom once held the record as the oldest person to successfully climb Mt. Everest, located on the Nepal-China border. Following the discussions, the Ambassador then met with a group of Nepalese students. 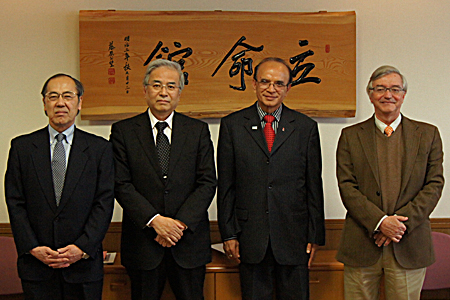 There are currently 29 students from Nepal studying at APU that play an active role in curricular and extracurricular campus life including the inaugural Nepali Week held in 2012. We look forward to an even stronger partnership with Nepal in the future.