On Friday, September 13, 2013, the APU Fall Graduation Ceremony was held, marking the beginning of a new chapter in the lives of 510 graduates from 38 countries and regions. Held at the APU Millennium Hall, this day of celebration was attended by many parents, friends and well-wishers. 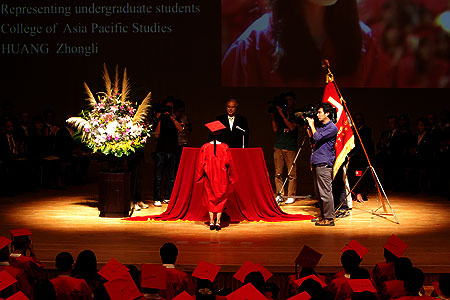 APU President KORENAGA Shun congratulated the graduates before presenting a graduate representative of each College with their degree. “Unfortunately, APU's ideals of ‘International Mutual Understanding’, ‘Freedom, Peace and Humanity’, and ‘Creating the Future Shape of the Asia Pacific’ have yet to become universal in our current world. It is your mission to spread these ideals throughout East Asia and the Asia Pacific. It is you who studied under APU's noble ideals who will be able to overcome the memories of the past to create new relationships and a new history”. 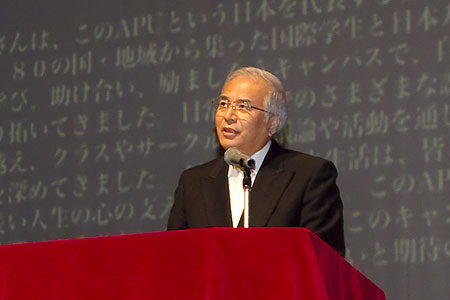 Graduates representing the undergraduate and graduate schools addressed the audience and spoke of their time at APU. Recipient of the ANDO Momofuku Honor Prize, Ms. Nguyen Thi Thanh Man (APM4, Vietnam) addressed the audience:“My dream is to become a social entrepreneur in Vietnam. In graduate school, not only will I continue my studies of social entrepreneurship, I will also do my best to serve as an ambassador of APU, strengthening and growing the networks, friendships, and experiences I have acquired here”. 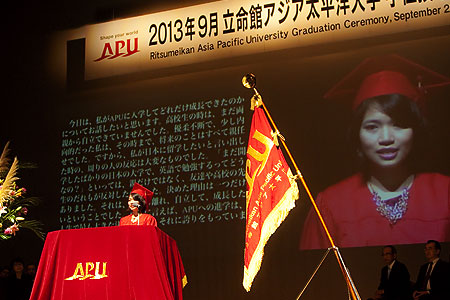 Mr. SAGYNOV Bektur (GSM, Kyrgyz Republic) then addressed the audience as representative of the graduate school, “APU offers a unique multicultural atmosphere, which helped us broaden our horizons and learn to understand and to adapt to cultural differences. In my opinion, this adaptability and flexibility are qualities, which will prove very useful in our future careers. It is very important that we all made a lot of good friends at APU, which, speaking in business language, is another valuable asset we gained”. 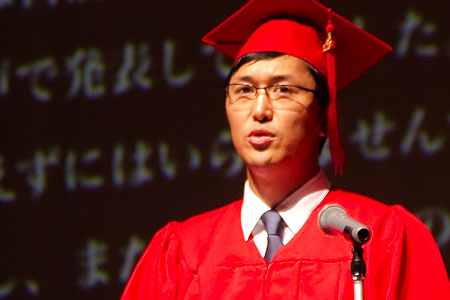 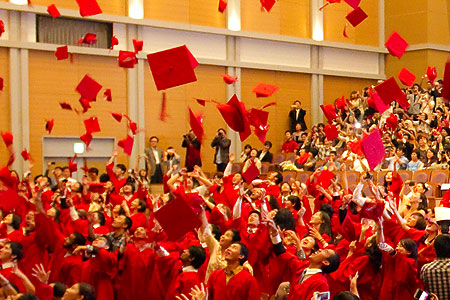 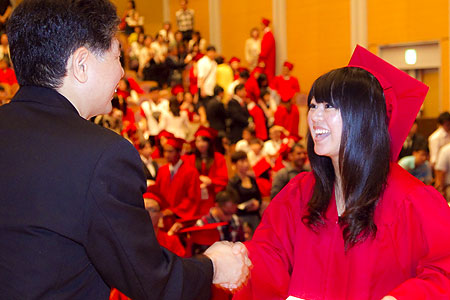 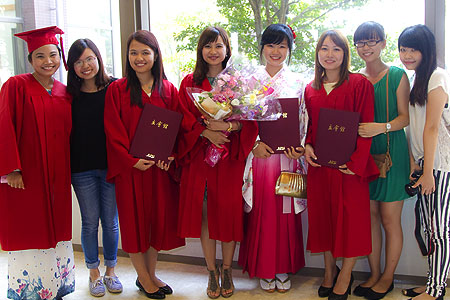 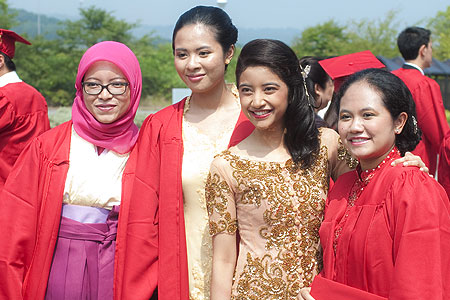 Established through the courtesy of the late Honorary Doctor ANDO Momofuku, the founder of Nissin Food Products Co., Ltd. The scholarship aims to support undergraduate students who are scheduled to graduate and who have a strong desire to contribute to the Asia Pacific Region in their future careers. Each year one to two students are awarded this scholarship.

You can see pictures and videos from this year’s Graduation Ceremony here: