On Tuesday, October 22, APU invited Mr. ANDO Koki, President and CEO of Nissin Foods Holdings Co., Ltd., to deliver a lecture entitled "Mission: Destroy Cup Noodle" as the 18th installment of the Top Executive Lecture Series. Top Executive Lectures are held annually as part of our career development program, and this year the Millennium Hall was filled with a standing room only audience. 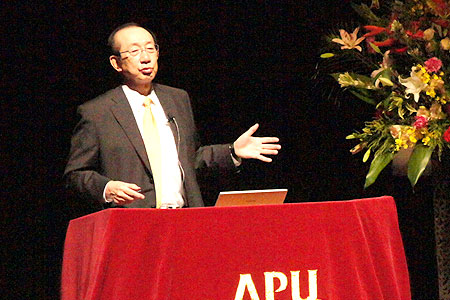 In his lecture, Mr. ANDO recounted, "Since I became president at the age of 36, I have thought that the company cannot survive only on Cup Noodle, our main product which was developed by our founder, so I adopted a competitive system to spur the development of products that can counterbalance Cup Noodle." He discussed initiating a system in which decisions for each product are delegated entirely to a team of three to four brand managers and talked about how profits are disclosed for each employee project. He also explained the systems Nissin uses to recruit young talent and to get new products to market as quickly as possible. "The most important elements for marketing are a unique imagination, the ability to make level-headed decisions, the ability to see projects through to fruition and smart conceptual design," remarked Mr. ANDO.

The students listened intently as Mr. ANDO spoke about Nissin's efforts to tackle food scarcity in light of the fact that the world's population will reach 9 billion by 2050, including the company's contributions to the World Food Program. Mr. ANDO closed with a message of encouragement for the students: "In business, success boils down to two things: Curiosity and perseverance. By taking an interest in things and thinking about the basic principles underlying them, you can persevere until the end and find a breakthrough. The key to victory is to never give up until you succeed." 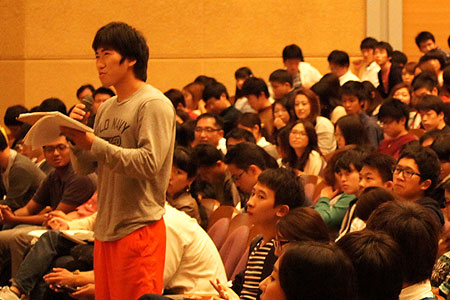 In the question-and-answer session, Mr. ANDO responded to a student who asked about the relationship between obesity and instant ramen by saying, "Ramen today has a relatively good balance of nutrients, so you can achieve an ideal nutritional balance by complementing it with fruit."

Mr. ANDO ended his session by saying 'thank you' in several languages, including Russian, German, Thai, Korean and Chinese.

After the lecture, one student said, "His talk was full of humorous anecdotes; I really enjoyed it." Another student remarked, "I learned the importance of maintaining a constant awareness of issues."

As part of our career development initiative, APU invites top executives from global companies across a wide range of sectors to give speeches on the political and economic situation in the world today, future outlooks on the issues the international community faces, and the types of human resources that society needs. The Top Executive Lecture Series is a valuable opportunity for students to think about career development and what it means to work, and it can provide them with clues on their future careers.