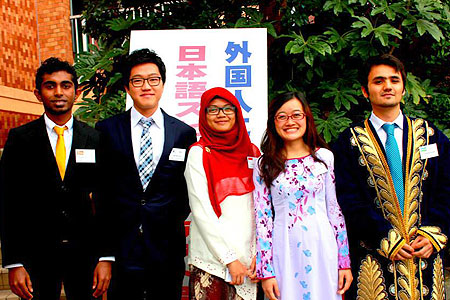 Hosted by the Goto Gakuen Trust, this annual contest is held in order to promote international understanding and is open to foreigners who have lived in Japan for less than 5 years. Seventeen exchange students based in Oita Prefecture submitted entries of which fourteen were selected for the contest including five students from APU. 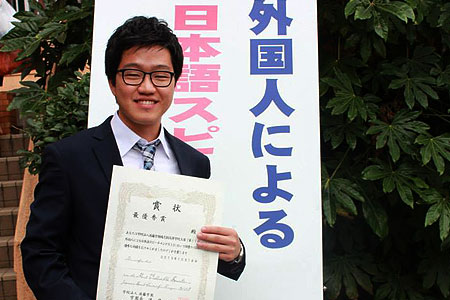 In his winning speech entitled “Leave Asada Mao and Kim Yuna Alone”, KIM Dong Hyun used the rivalry between figure skaters ASADA Mao from Japan and KIM Yuna from South Korea to emphasize the importance of exchange and interaction between young people as a solution to fixing the relations between the two nations, which have soured due to historical issues between the two countries. One of the judges said that Mr. KIM spoke brightly but empathetically about the timely issue of Japan-Korea relations, and another said, “your Japanese was so fluent that if I closed my eyes I would think you were Japanese”.

Expressing his joy at receiving the award, Mr. KIM said, “I am so happy that I was able to stand in front of hundreds of people and not just get my point across in Japanese, but also have the audience understand and be so responsive. I was nervous, but being able to face this was such a good experience”.