On Thursday, October 24, 2013, a cherry tree sapling descended from a cherry tree that survived the atomic bombing of Hiroshima was planted in the courtyard of the APU Faculty Office Building. The sapling, which was planted on United Nations Day, was a gift from Green Legacy Hiroshima*1. GLH co-founder Nassrine AZIMI joined President KORENAGA Shun, Pro Vice President Edgar PORTER and other APU officials at the planting ceremony. 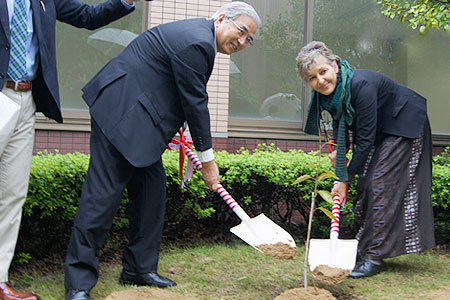 The gift of this tree was the idea of Ms. AZIMI who had become friends with College of Asia Pacific Studies Associate Professor Faezeh MAHICHI on the latter's visit to Hiroshima in the summer of 2012. Ms. AZIMI told Associate Professor MAHICHI how she would love to give a tree to APU where students from around the world gather under the ideal of 'Freedom, Peace and Humanity'.

Before the tree planting, President KORENAGA gave a brief greeting, "APU's basic ideal of 'Freedom, Peace and Humanity' resonates with Green Legacy Hiroshima's policies. I am very honored that this tree is being planted at APU today, which also happens to be United Nations Day." Ms. AZIMI remarked, "We call our tree planting activities the '1,000-year project' because these trees will live for hundreds of years. These trees, which withstood the atomic bombing, are highly symbolic of life itself. APU's students will also become involved in this project by caring for this sapling and spreading our message. APU's diversity and basic ideals resonate with our mission, and it is my sincere hope that the young people here will raise this cherry tree as a symbol of peace." 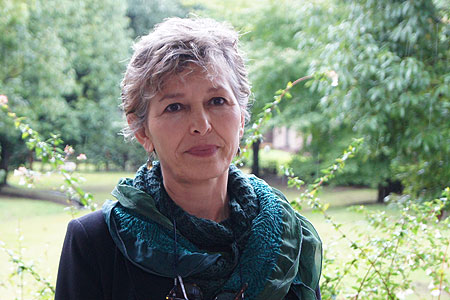 *1: Green Legacy Hiroshima was established by the United Nations Institute for Training and Research (UNITAR) and a non-profit organization called ANT-Hiroshima to protect the trees that survived the atomic bombing of Hiroshima and spread a message of peace. The survivor trees are a "green heritage", and GLH uses their seeds and saplings to spread peace from Hiroshima throughout the world. The group has sent seeds and saplings to botanical gardens and universities in over 15 countries including Afghanistan, Argentina, Australia, Chile and South Africa.