On Wednesday, November 6, 2013, former US diplomat and Vice-President of Asian Development Bank (ADB), C. Lawrence Greenwood Jr., delivered a special lecture on one of the biggest issues of the day: the Trans-Pacific Partnership (TPP) and its implications for Japan and the US. In his 60-minute lecture, Mr. Greenwood gave a brief overview of the TPP, focusing on the anticipated challenges and the economic benefits it could bring about if an agreement is reached, and he made a few remarks on the current situation. 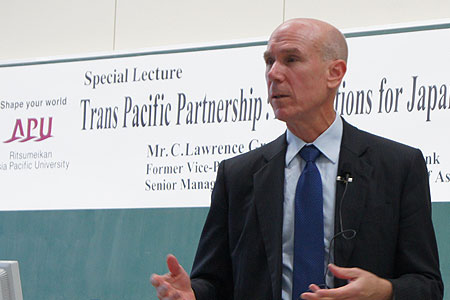 The lecture commenced with Mr. Greenwood’s remarks on free trade negotiations. “The way trade negotiations work is negotiators offer concessions that open up their own  market in one area to a trading partner. The contradiction here is that you’re actually helping yourself more than helping the other country when you open your market. You will actually gain more economically by doing that.” Trade agreements are needed to overcome political opposition to such opening.  He followed with an overview of the TPP, in which he emphasized the important role the TPP is expected to play in structural reforms—the third arrow of Abenomics. (The first two arrows are monetary easing and flexible fiscal injections.)

Mr. Greenwood continued by discussing the detailed content of the TPP and the estimated macroeconomic impact it will exert on Japan and the US. Giving his view on the controversial provision regarding Japanese agriculture in the TPP, Mr. Greenwood firmly stated, “The TPP will not destroy traditional Japanese agriculture because it is already dying.” He also commented on the prolonged TPP negotiations that are expected to be finalized by the end of this year: “Time is not the friend of the United States.” He touched on the political implications and timing of the negotiations related to the American mid-term elections in 2014 before signaling for the 30-minute question-and-answer session. 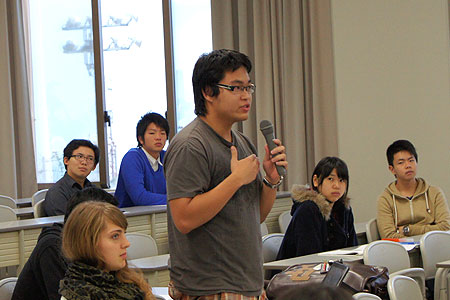 Mr. Greenwood welcomed a variety of questions from students on topics ranging from the standard minimum wage and APEC to the probability of China joining the TPP and Singapore’s role within the agreement. In response to a student’s question on how the TPP may affect other free trade agreements, Mr. Greenwood hinted at the possibility that the TPP would be expanded to other parties by saying, “My personal hope is that eventually other trade agreements and the TPP will merge together and define trade relations.”

Mr. Greenwood, who currently holds the position of senior managing director for MetLife Alico and had over 30 years of experience working with the US State Department prior to his time in ADB, was able to present students with new perspectives on the TPP.

Special lectures provide students with an invaluable opportunity to hear from experienced professionals across a wide range of sectors. We look forward to holding more of these lectures in the future.