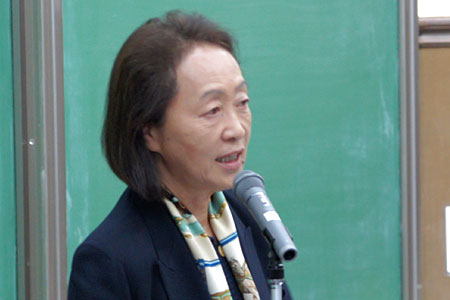 In her lecture, Dr. Nishimizu talked about the poverty she saw in South Asia during her time with the World Bank. Touching on the frustration that the poor have with the powers that be, she said: "Poverty is a man-made disaster caused by bad politics. At the World Bank, when I encountered corrupt governments that had bad policies, I strived to drive out the corruption before making any investments." Next, she discussed Bhutan, a South Asian country where 97% of the citizens claim to be happy.* "The country has leaders whose actions are consistently based on what makes the people happy. The people trust them, and their policies aim to increase these feelings of trust and happiness."

On the topic of Japan’s future, Dr. Nishimizu remarked, " In any country, change for the good often comes from the private sector, but to become a better society, more companies need to place priority on pursuing happiness for their workers and their workers' families." 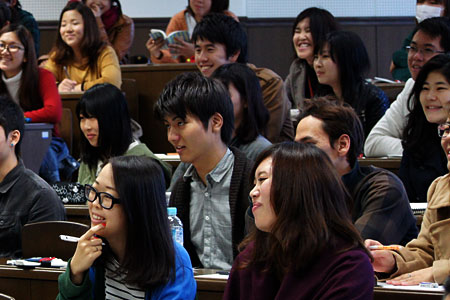 course of action do what needs to be done. The leadership that each person exhibits is what makes countries great." Although she spoke in soft tones, Dr. Nishimizu's lecture revealed her strong spirit, and the students listened intently.