Rector Prof. Dr. Kerstin Fink of the Salzburg University of Applied Sciences (left in picture) and President Shun Korenaga (right) met at the annual meeting of the  “NAFSA: Association of International Educators” at San Diego in June 2014 to officially announce the establishment of a Dual Degree Program between the two universities in the field of tourism. 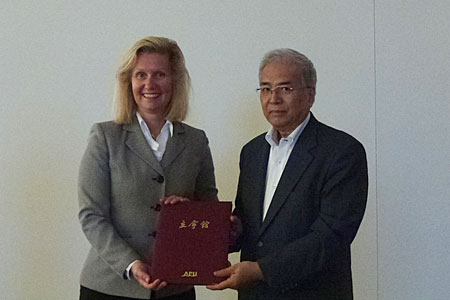 Applicant recruiting has begun from among first-year APS students, with selected students to begin their studies in Salzburg from the AY2015 Spring Semester. APU is expected to receive the first batch of Dual Degree Program participants from Salzburg University of Applied Sciences from the AY2015 Fall Semester.This new agreement follows on the heels of a Student Exchange Agreement established between the two universities in December 2009 which spurred ongoing talks between the two universities that eventually led to the implementation of this Dual Degree Program.