The Presentation Ceremony for the ICHIKAWA Scholarship for African Students was held on Friday, September 12, 2014 with Mrs. ICHIKAWA, the three awardees who will be receiving aid from October 2014 to September 2015, President KORENAGA, and Dean of Student Affairs KIM Chan Hoe in attendance. 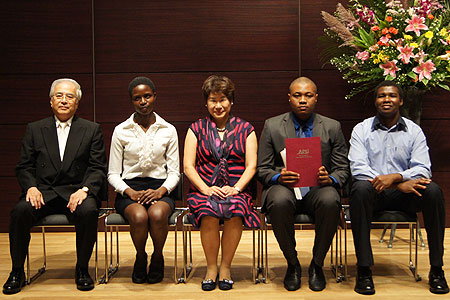 The ICHIKAWA Scholarship for African Students, established in 2013, provides 50,000 yen per month for a maximum of a year to APU students from Africa. This scholarship was established by the good will of Mrs. ICHIKAWA Hiromi, the mother of an APU graduate. 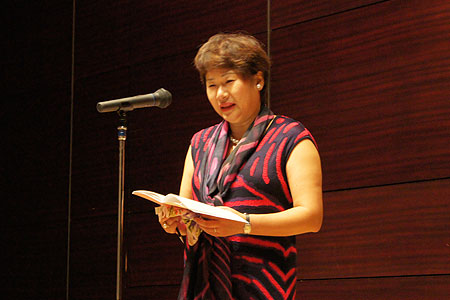 After President KORENAGA’s opening address, Mrs. ICHIKAWA presented each of the three recipients with a Scholarship Award Certificate upon which each student expressed their thanks to Mrs. ICHIKAWA. Scholarship recipient DE Castro Milvan Anastancio (APM, Mozambique) spoke about his future aspirations saying, “My dream is to return to my homeland of Mozambique and work to improve my country’s political and economic situation. I am studying in Japan, a country whose politics and economy is stable, and I believe that it is my mission to change my country for the better.” He concluded his speech by promising Mrs. ICHIKAWA that he would continue to devote himself to his studies. The other two recipients, ONGARIA Keith Peter (APM 3rd Year, Uganda) and ADITE Sarah (APM, Uganda), both expressed their appreciation for being accepted for this scholarship.

Mrs. ICHIKAWA spoke about her reason for establishing the scholarship which was due to the connection that her daughter had to Africa as she studied in Botswana for a year on the Student Exchange Program when she was an APU student. Mrs. ICHIKAWA told each of the students to “think of her as their Japanese mother” and gave a heartwarming address of her own. A luncheon was held after the Presentation Ceremony where both the students and the president of the African Chapter of the APU Alumni Association joined and deepened their friendship through talk of student life and extracurricular activities at APU.