On October 24, 2014, former Under-Secretary-General of the United Nations AKASHI Yasushi gave a special lecture on “The Challenges Japan Faces in the World”. The venue was packed with both domestic and international students. 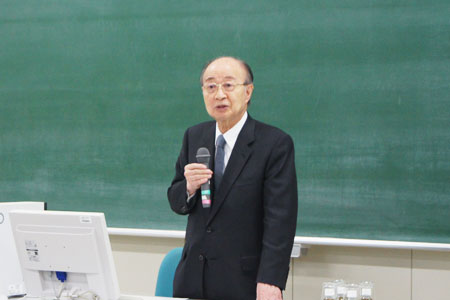 First, Mr. Akashi expressed his support for the pacifism and anti-militarism of post-war Japan and talked about the Preamble and Article 9 of the Japanese Constitution, mentioning “Paragraph 1 of Article 9 states non-use of force in international disputes and this paragraph is the same as the UN Charter. However, paragraph 2 states no armed forces and no right of belligerency, which is a “utopian notion.” Mr. Akashi said that considering current international situation surrounding Japan it is necessary to have a minimum self-defense force and Japan already has one. Thus, on the recent domestic controversy on the collective self-defense, Mr. Akashi stated that Japan needs to interpret the Constitution realistically, referring to Article 51 of the UN Charter, stipulating the inherent right of collective as well as individual self-defense until the Security Council has taken measures.

“In international politics, minimum self-defense becomes deterrence. To prevent an arms race, implementation of the balance of power is necessary as an insurance. In addition, transparency and greater dialogue as well as realistic assessment which is not based on wishful thinking are also important.”

When Mr. Akashi was in charge of peacekeeping operation (PKO) in the former Yugoslavia, he felt difficulty to adhere to 3 principles of PKO (consent of the parties in conflict, UN impartiality and the use of minimum force in self-defense). In actual relations, it is difficult to differentiate black and white (good and evil) as it is often very grey in between. In that case, Mr. Akashi has always tried to make the best choice based on full discussion with his colleagues. 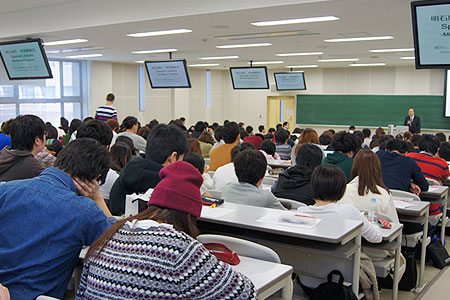 Finally, he raised what Japan and the Japanese should do: increase ODA (Official Development Assistance), participate in UN and non-UN peacekeeping and especially the necessity for more heart-to-heart dialogue across national and cultural barriers in order to free oneself from Galapagos mentality (insular mentality). It is difficult to do so between governments, but as individuals, especially as students who have the privilege to talk freely, you should try to do this and it may become a future asset for you.

Mr. Akashi gave the entire lecture in English. He also gave an advice about learning English based on his 40 years’ experience at the UN and said that accent and pronunciation are not as important as generally thought, but contents of your talk are more important.