On Friday, December 5, 2014, Mr. SHUKURI Masafumi, a former Vice Minister of Land, Infrastructure, Transport and Tourism gave a lecture entitled "Kasumigaseki and Taking the Shinkansen to the World". 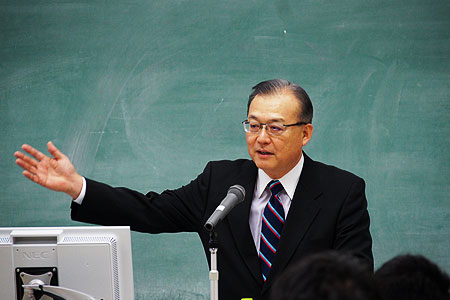 After briefly explaining several projects he worked on during his many years in government, Mr. SHUKURI provided an in-depth description of the Shinkansen (bullet train) project he worked on while serving as the Vice Minister of Land, Infrastructure, Transport and Tourism. He explained that five hurdles, namely, safety, time, frequency and capacity, had to be overcome before Japan was able to successfully develop the Shinkansen, and he discussed the potential for exporting Shinkansen technology.

He also discussed the timing of decisions by saying, "Sometimes you have to think in the short term of four to five years, but other times you must think long-term—10 to 20 years. You must make decisions when it is time to decide, then strive to adjust to any changes that occur after that.   Otherwise, nothing will ever change." The students in the audience listened attentively to Mr. SHUKURI’s lecture.