From December 12, 19 and 20, Professor Yukihiko Nakata of the College of International Management (APM) and the Oita National College of Technology (Oita Kosen) jointly held a program ("Renewable Energy Program") to experience and learn about renewable energy with forty second-year students participating from Oita Kosen's Department of Electrical and Electronic Engineering. This program received funding support from the Japan Science and Technology Agency as part of its "Science Partnership Program (SPP)" and was held with the purpose of fostering interest and intellectual curiosity in technology, science and mathematics as well as nurturing an awareness of higher education and training technical personnel.

On the first day of the program, the participants studied an overview of renewable energy and then learned first-hand about the principles of a solar battery by assembling and actually running a model car kit powered by a solar battery. 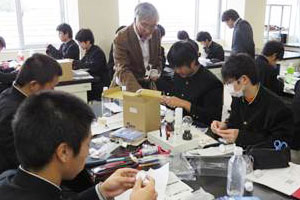 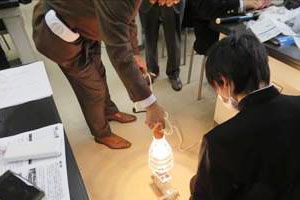 On the second day, the participants learned about the planning and development of a new solar battery product in order to understand not only "research" but the importance of "development". They then separated into groups to exchange ideas and selected the best group. 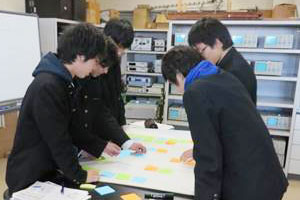 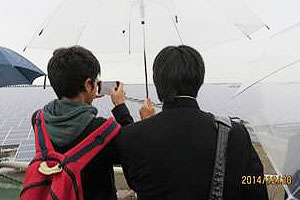 Visiting the "Nikki Mega Solar" facility in the rain
On the third and final day of the program, the participants visited the "Nikki Mega Solar" facility in the Oita seaside industrial zone, the "Steam power generation" in Beppu City's Kannawa District, and the "Miniature Hydro-Electric Power Plant" in Taketa City in order to experience first-hand how renewable energy is utilized in Oita Prefecture based on what they learned in the program. The majority of the participants evaluated the program favorably in the post-program surveys, with 90% commenting that it was "interesting" and 83% responding that they "wish to participate again".