On Friday, February 6, 2015, the Environment and Development Cluster of the College of Asia Pacific Studies hosted a panel discussion on the creation of a circular economy. This discussion was the first in a series of seminars aimed at raising awareness of the importance of the mitigation of environmental degradation. 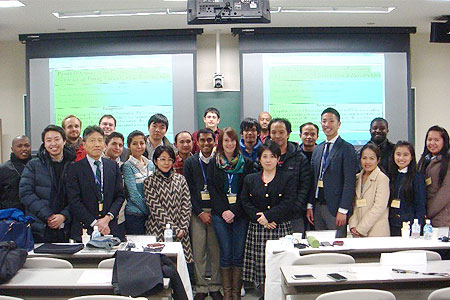 The session was designed for dealing with environmental issues that APU students can tackle, and act on. The discussions focused on possible measures they can take to help solve these problems. The panelists consisted of young professionals and APU alumni who are actively involved in the solution of environmental problems at the grassroots level. 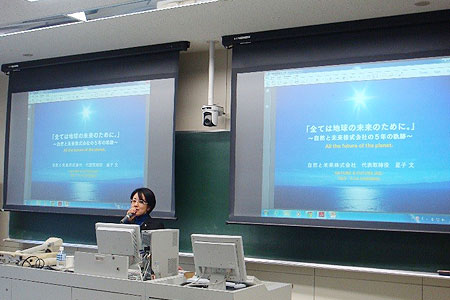 The first speaker, Ms. HOSHIKO Aya, CEO of Nature and Future Inc., gave a keynote speech on refining high-quality biodiesel fuel from used cooking oil. Since the company's founding in 2011, this small five-person company has encountered many problems including harassment from vested interest groups, but her company was able to deal with these problems by mobilizing supports from local residents, particularly women’s groups. Last year, it was presented with the Minister of the Environment's Prize for its efforts. Going forward, her company intends to continue engaging in grassroots level environmental activities, and her impassioned talk struck a chord with the audience. 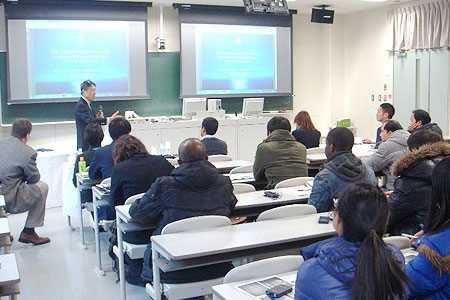 The next speaker, Mr. Ranahansa Dasanayake from the University of Applied Sciences, Trier (Germany), spoke about sustainable seawater desalination. He was followed by Ms. Christine Meister from NPO Satoyama, whose spoke about regional activities for the creation of a sustainable society. The session ended with a talk about converting sewage sludge into energy by Mr. Hayashi Yoshitaka of Swing Corporation.

The event organizer, APS Professor TSUKADA Shunso, remarked on the panel discussion as follows: "Although we did not have enough time to get into detailed discussions in this occasion, we are planning to hold another session to keep discussing these issues with the students."

*APS has four clusters—Environment and Development, Hospitality and Tourism, International Relations and Peace Studies, and Culture, Society and Media—in which students can specialize.